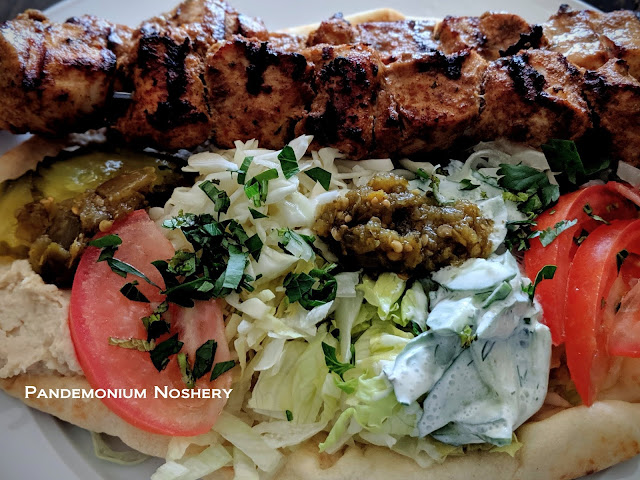 When Evelyne posted that this months Eat the World destination was Israel I had major mixed emotions. Most people know I lived there and is a place that a friend coined my "heart home". It will always be the place I think about when my eyes are closed and long for when I feel homesick. So why the mixed emotions? I didn't know if I wanted to post pictures to add to this post or not, I have been saving them for a series but never really found the right words to describe them adequately. In the end I decided to add a few, they are the more candid photos I took, and I will eventually post my series.


The second problem I was facing was what to make that I haven't already shared? All the most iconic Israeli foods I cook regularly and have posted about. Really if you were to look at my regular menu you would see more middle eastern food than anything else, it accounts for at least half of what we eat at this point.


Israeli cuisine is fascinating because it's such a mix. The modern state of Israel was founded in 1948 and with that there was a surge of Jewish settlers returning to the region. Those settlers adopted their cooking to what was available to them giving Israeli cuisine and obvious middle eastern influence. But they also brought with them the cuisine of where they were before, meaning mixed in with the falafel and hummus there are also Spanish and North African influences brought by the Sephardic Jews and Eastern European customs brought over by the Ashkenazi. This hodge-podge make for an exciting and delicious place to live.


So go check out falafel and eat it with hummus and salatim. Or maybe Ben Gurion rice, also known as ptitim or Israeli couscous. Or pop in to any bakery in Israel and grab rolled baklawa or bourekas. And don't forget the holiday food, matzo brei, matzo ball soup, latkes, sofganiyot, and hammentashen. Then there are shakshuka cafes and pickled vegetables and mujudara.

Want to enjoy some of the Palestinian dishes from the region? Treats like falafel, hummus, and chopped salads are enjoyed by all. But some distinct dishes include the national dish musakhen, but also maqluba, maftoul, zahra bi tahineh, man'oushe, or preserved labneh. Or maybe you could be interested in some Palestinian desserts? Try atayef, knafeh, or ma'amoul.

Make sure and enjoy them, all paired with a an herby and fresh limonana. But know what I loved eating I haven't gotten around to posting about?

Shawarma. I hadn't posted about shawarma, and today we are going to fix that. Israeli pita bread is nothing like what we buy here in the states and pretend is pita, it's like comparing a fresh French pastry to one of those sticky prepackages pastries you can get in vending machines. They are kind the same thing, technically, but not really. They are chewy, and thick, and holds together well when you fill it with all kinds of goodies. It's an apt metaphor too since French baguettes are really popular for shawarma as you can see above.

In the case of street shawarma the goodies are meat and lots of salads. The meat is typically lamb though chicken is also common. Both are cooked on a rotating spit to crisp the outside before being shaved off and piled in whichever carb you choose. The street food style is amazing, but due to the special equipment needed it's not how home cooks make the dish, so here we are going for the same great flavor and spice, but cooked on a grill.

So with that decided, Israel started to feel like the perfect choice for this month. Also they just hosted the world for Eurovision. Israel didn't win this year, but it looks like it was a lot of fun! 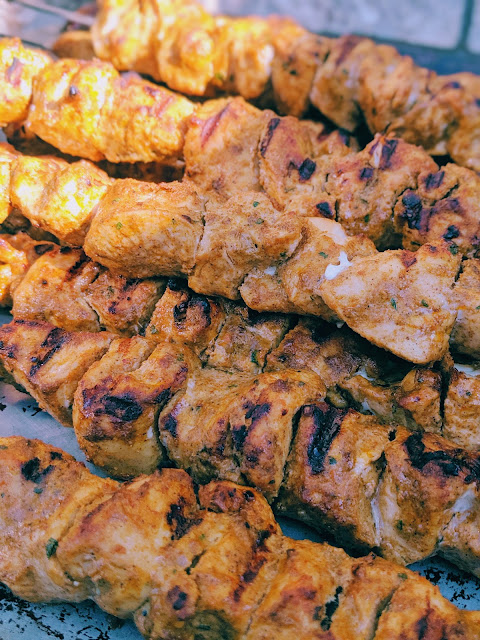 Since good pita is hard to come by, and you want something to hold up to all the toppings, I used the take and bake naan from Aldi's as a delicious base.

Olive oil in this recipe is covered by so many spices and seasonings it doesn't stand out as a flavor but if you want really good Israeli Olive oil check out Galilee Green in the Galilee region of northern Israel.

Combine the all of the spices and seasonings, lemon juice, olive oil, and yogurt. Trim and cube the chicken breast. Combine the spice mixture and the chicken and allow to sit in the fridge at least 8 hours.

Gently thread the marinated chicken on to skewers.

Heat the grill to high heat. You want the heat high enough to char the outside of the chicken quickly so it doesn't dry out from overcooking.

Remove from the grill and serve with pita, hummus, tzatziki sauce, and salads.

Check out all the wonderful Israeli dishes prepared by fellow Eat the World members and share with #eattheworld. Click here to find out how to join and have fun exploring a country a month in the kitchen with us!