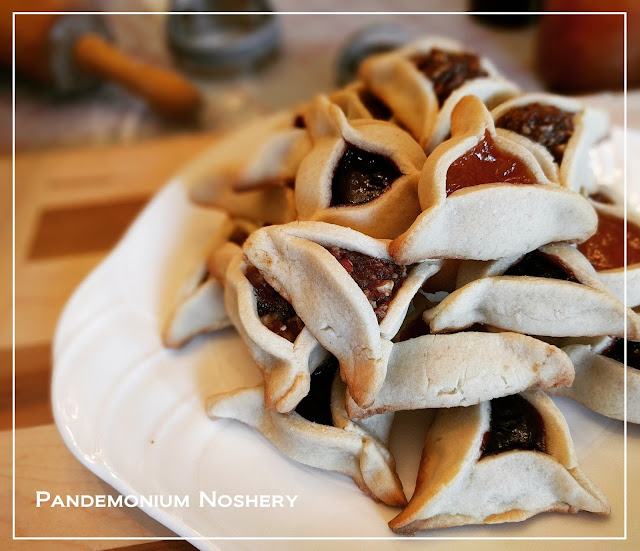 Hamantaschen are a delicious triangular cookie made for Purim, the Jewish holiday celebrating the story of Esther. The story is in the Megillah or Book of Easter in the Bible and is a time of great celebration to commemorate the triumph over the evil Haman. A Jewish friend said that quite a few Jewish holidays consisted of "Someone tried to kill us, it didn't work, lets eat". Purim not only were they not killed, the man who plotted against them was. This makes it a topsy-turvey kind of day with costumes, celebrations, sending portions to one another, and of course hamantaschen.

Portions are mentioned in the Book of Esther


"Therefore the Jews of the villages, that dwelt in the
unwalled towns, made the fourteenth day of the month
Adar a day of gladness and feasting, and a good day,
and of sending portions one to another."

Portions, or mishloach manot, are gifts of two different foods given to show that Haman was wrong in calling the Jewish people a "scattered and divided nation".

As to the cookies themselves I have heard four different meanings behind what they represent. All agree they are Hamans________. However, what of Hamans they are varies. The first version I heard said they were Hamans noses, that when they were hanging him something happened to his nose. Another says it is his triangular hat, and watching some Elon Gold videos on youtube he mentions Hamans weird ears. I can't find the exact video but it all started here. Another suggestion is that it comes from the German word "tasche" meaning pouch.

Whatever the origin the cookies are as fun to make as they are to eat. They can be filled with anything. I made peach, blackberry, and spiced date and pecan filled ones. The peach was jam made sister made and it was delicious. As soon as I opened the jar it smelled like fresh peaches. It was a little thin though so I added some cleargel to thicken it up a bit.

For the cookies themselves I used the Tori Avey's buttery dough recipe with my own concoction for the date filling.

This can be made in a regular mixer, just add in the same order, I just happen to be in love with my food processor and so I used that instead.

Add the butter to a food processor and start it until the butter is smooth. Add the sugar and vanilla and allow it to run a bit more. Then add the egg and salt and even more running.

I remove the top to add the flour. I tried not and it made a mess. So remove the top, add half the flour and then combine it. Add the remaining flour and run until you have a smooth dough. It should stick together easily but not be sticky. If it's too dry add water, a little at a time, until it is the right consistency.

Wrap in plastic wrap and refrigerate at least an hour and a half, up to over night.

When the dough is chilled, roll it out fairly thin and cut in to circle. Top with a dollop of whatever filling you choose and pinch the sides on three spots to seal.

Add the dates to the food processor and run until mostly chopped. Add the vanilla, salt, allspice, and cinnamon and keep running until very finely chopped but not a smooth paste.

In a small saucepan add the water, date mixture, and lemon juice. The water will turn a milky white. Simmer until the mixture is dark again and fairly thick, most of the water will have cooked out.

Remove from the pan, cover, and chill.

When ready to use remove from the fridge and drain off any liquid that separated out. Chop the nuts and stir in to the date mixture. Use as directed above.

If your nuts aren't crisp you can toast them. Toasted oats are also delicious in the filling, just made sure and use quick cooking. Stir in to the chilled mixture and let stand for 15 minutes. Don't add before chilling or it gets really gummy. 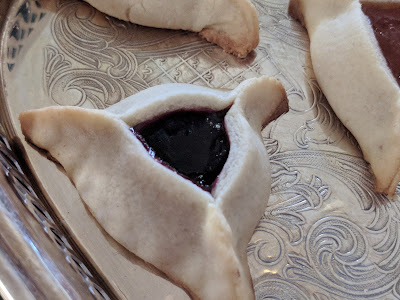