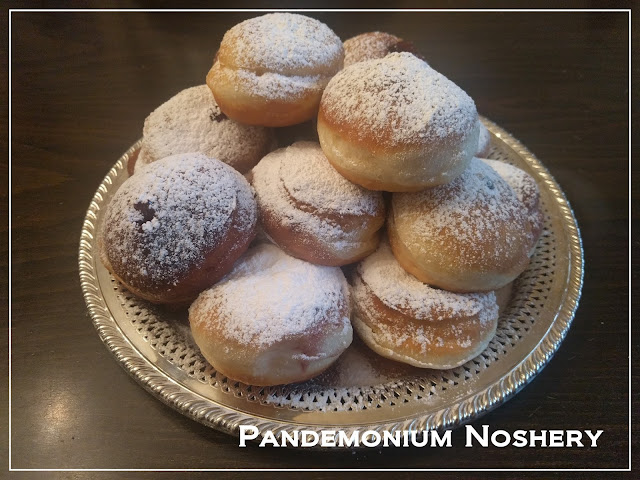 Chag Sameach! Hanukkah, or the Festival of Rededication is a time to remember the overthrow of the Syrian Greeks in 164 BC and the reclaiming of the Temple. According to My Jewish Learning:


"In the autumn of 164, Judah and his followers were able to capture the
Temple in Jerusalem, which had been turned into a pagan shrine. They
cleansed it and rededicated it to Israel’s God. This event was observed in
an eight-day celebration, which was patterned on Sukkot, the autumn
festival of huts. Much later rabbinic traditions ascribes the length of
the festival to a miraculous small amount of oil that burned for eight days."

Several traditional Hanukkah foods eaten during this time are fried. And I love fried foods.

Combine the water, cream, and sugar in a bowl. Sprinkle the yeast over the top and leave to get foamy.

In a separate bowl beat the butter, eggs, salt, and vanilla. Combine both the bowls.

Stir in the flour, once cup at a time until you can't stir it any more. Remove from the bowl and knead until the dough is smooth. and no longer sticky. Place in a bowl, cover with a cloth, and place in a warm place until doubled in size.

Remove and knead slightly to deflate. Roll out until it's about 3/4 of an inch thick. Cut with a cup about 3-4 inches across. Twist the cup a little back and forth a little to cut through the dough and tug the sides back together. Let the cut out rounds rise again.

Once they are about halfway done add oil to a large pan and heat. I check the oil by watching it. When it's hot it starts to look like it has wrinkles on the bottom on the pan. You can also drop in a bit of dough in to the oil and see if it bubbles around the dough. If not, it's not hot enough. But you also don't want it to be too hot or the outside will cook before the inside does. Flip to cook on both sides and remove to a rack to cool.

When they are cool enough fill with jelly and dust with powdered sugar. Or fill and top with anything you like.