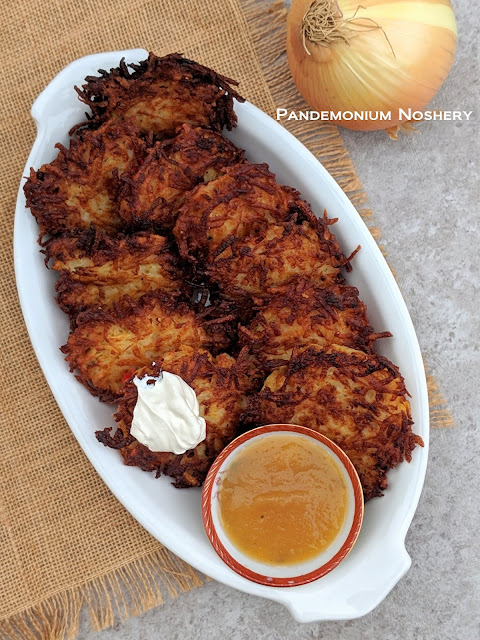 Another iconic and delicious fried Hanukkah dish is latkes. They are the perfect potato fritter. The onion rounds out the flavors amazingly. And while I was skeptical about sour cream and apple sauce with the onions it works. I shouldn't have doubted.

The recipe is pretty simple, after looking at tons online I decided they are all about the same with a few tips here and there on how to make them. I'm going to write it in proportions that can be custom sized each time.

Start the oil heating now. It needs time to get good an hot. About half an inch in the bottom of the pan. Be generous with the oil but not enough to cover the top.


Grate the onion before the potatoes. I like to put it in a colander to drain while shredding the potatoes. Grate them in to a bowl lined with muslin or cheese cloth. The potatoes tend to turn pinkish brown really fast at this point so work quickly. Twist the potatoes in to a small ball inside the cloth and squeeze and twist as hard as you can over a second bowl to remove as much liquid as possible, saving the liquid.

Pour off the drown liquid from the potatoes, leaving the white starch in the bottom. Whisk the eggs in to the starch to loosen it and then add to the potatoes. Add the onion and matzo meal, along with the salt and pepper. This part I like to do by hand, especially if you are making a large batch. I tried with a spoon and it just doesn't mix the eggy starch mixture with the potatoes as easily that way.

I mentioned a few days ago that I really don't like to form things. This is of course no exception. So I use a large spoon. This spoon to be exact. I guess I don't mind as much if I have a tool to use, just rolling them by hand is my kryptonite.

It's a rice spoon, just a bit larger than a regular serving spoon. I like to take a a glob, about two tablespoons size and pack it in to the base ignoring the top so it's round. Pull any loose pieces that hand down over the sides back on top and press in the center to create a divot. The divot is important to help maintain a uniform thickness throughout. You don't want them too thick in the center and with the concave spoon, that happens.

Slide the patty in to the frying pan of pre-heated oil. Fry until golden brown on one side and then flip. If you go to flip it and the bottom doesn't feel solid or starts to bend as you flip it, that side isn't done and allow it to cook more. Also make sure your oil isn't getting too hot so that the outside cooks before the inside down. I have found when frying lots of stuff I have to turn the heat down every so slightly periodically as it retains heat. 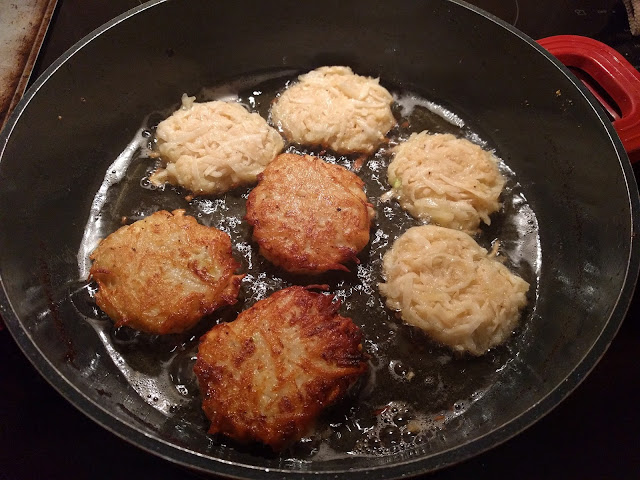 Remove to a cooling rack and serve with applesauce and/or sour cream. I happen to really like both on mine. 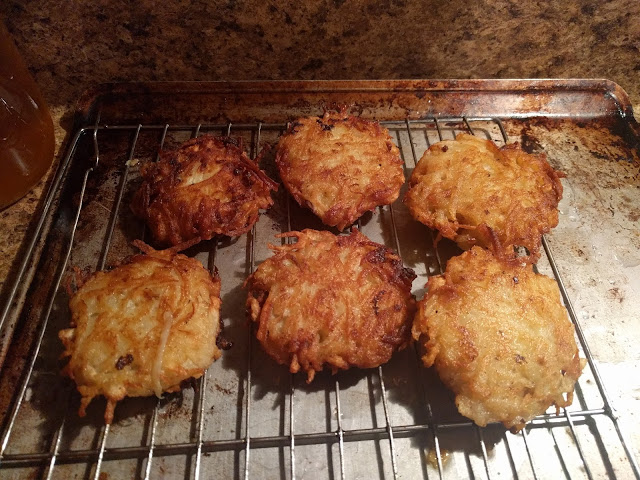