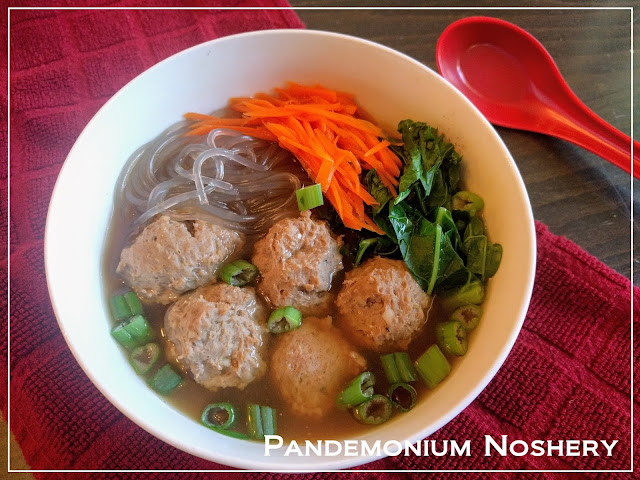 Bakso is an Indonesian street food. Typically when I think of street food I don't think of soup, so some day I hope to go and see the logistics of this one. But for now I can taste the flavors in my own home.

Equally as important as the flavor here, is the texture. The meatballs are run through the food processor to break down the proteins. The meatballs take on a wonderful spongy and dense texture. Cooked in a spiced broth with veggies it was a great dinner. Hearty enough for winter, while still being light enough to enjoy all year round.

I was first introduced to Bakso through Penniless Parenting. And I changed so little I'm just linking back to her recipe. I used kale for my greens, I cooked the leaves whole in the broth and then removed to chop and add to individual bowls. I also used Korean dangmyeon noodles since that's all I had on hand.

But the third thing I want to talk about slightly. I love cooking, all the tedious repetition of slicing vegetables, and piping out eclairs, and filling doughnuts, all of it. Except shaping anything small by hand. I hate forming arancini no matter how worth it it is in the end. I hate forming fritters. I hate rolling falafel. I don't even like making cookies even though I LOVE them. Meatballs happen to be the worst of them all. I think falafel would have tied for worst except I bought a falafel press so I don't have to. I even made arancini in that over the weekend to avoid it. But meatballs? How do you get around that?

With a pastry bag, that's how. Those things are so versatile. Fill the bag with the meat and slice the end off so the opening is about an inch wide. Then squeeze some of the meat out, cut it off with scissors in to the boiling liquid, and squeeze out the next one. The shape wasn't even that far off from a traditional round meatball.

Go ahead, try it, you won't be sorry.
Labels: Indonesian