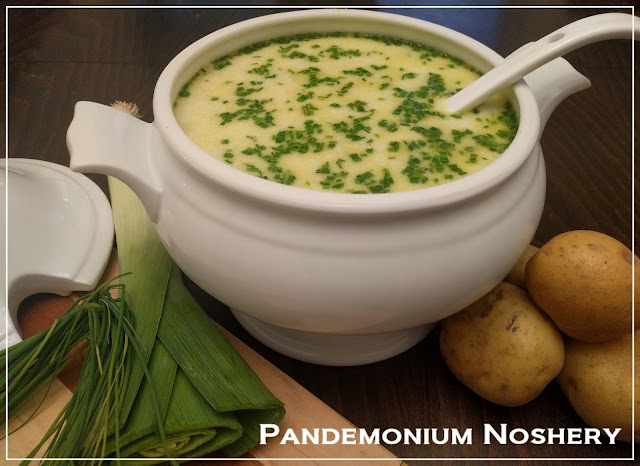 I used the Christmas holiday break to cook old favorite and to update the pictures here on this blog. I wasn't really creating any new posts though when I saw a recipe for Irish potato soup and started looking around, it seemed like something I would like to try.

One thing I really enjoyed was that it wasn't thickened and full of cheese. I mean I love both of those things and will continue to make potato soup like that, but this was something a little bit different. Also, A really basic google check of the recipe and it seems like it's not limited to Scotland or Ireland, it's eaten all over the United Kingdom.

Remove the roots of both leeks and then slice the tough green top off. Cut in half lengthwise and rinse to remove any dirt. Slice in to half moons.

Saute the leeks in olive oil until just starting to cook. You don't want them fully done at this point since they will continue to cook in the liquid. Add the chicken broth, bay leaf, pepper, and salt to taste.

Chop the potatoes in to two sizes. About three quarters of them will be in larger chunks. Still small enough to eat, about and inch. Cut the rest of the potatoes in to much smaller pieces, about a quarter of an inch. You want two sizes so the smaller ones break down and help thicken the soup.

Once the larger potato chunks are cooked remove the bay leaf. Stir in the heavy cream and the chives. Cook for another minute or two, check for salt, and serve.
Labels: England Ireland Scotland Wales