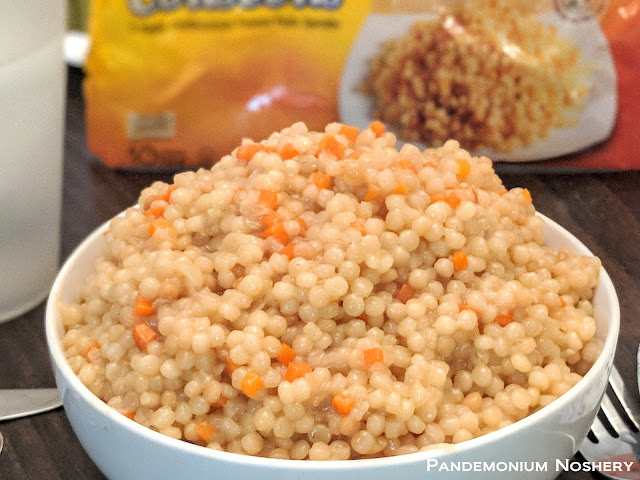 Ptitim, pearl couscous, Israeli couscous, or Ben Gurion rice whatever you call it the dish is the same. Created in 1953 when rice was expensive to import to Israeli. The Prime minister, Ben Gurion, worked with the Osem company to make a product to substitute it with made from wheat. The original version was rice shaped much like orzo. Other shapes were tiny squares, hearts, and the most popular round ones shown above, named after the Moroccan version because of it's shape.

Delicious and popular in Israel there are as many versions as there are cooks. Some quite elaborate, and really if it tastes cook it is welcome. One version I heard of often was ptitim, cottage cheese, and ketchup. But for this one I went with another really common version, and a fairly simple one.

Heat the oil in a medium sized saucepan. Add the onion and cook until the onion is translucent. Add the carrot and cook, stirring once or twice, for about 3 or 4 minutes. Add the couscous and keep cooking, stirring often, for about 5 minutes.

Stir in the chicken broth and bring the pot back to a boil. Cover and cook for 8 minutes. I found it didn't keep much stirring the first 5 minutes but needed it frequently after that to keep from sticking making sure to scrape the bottom. Replace the lid between stirring.

Remove from the heat and let stand, covered for about 5 minutes.

Stir and serve. Garnish with fresh herbs as desired. Parsley, chives, or dill are all wonderful.