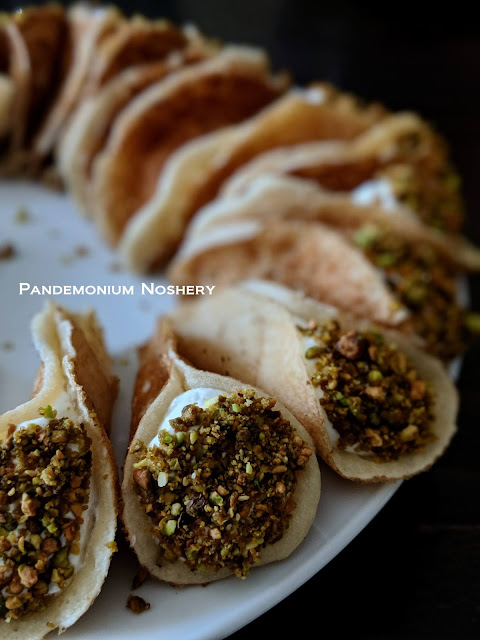 Eid Mubarak!! Atayef are a middle eastern treat popular for Ramadan and Eid al-fitr. It is believed that atayef comes from the Fatimid Dynasty. The Fatimid's were Islamic rulers of North Africa, primarily Egypt, from 909 to 1171 AD. Now the pastries are associated with holiday fare, middle eastern Christians eat them during Easter.
These special treats are like little pancakes that are cooked only on one side. This process cooks them all the way through but leaves one side softer making it possible to press them together in cones to be filled with a luscious cream. The cream filling mixture that encompasses and highlights one of the most popular dessert flavors of the region, namely orange blossom water. Then the end is dipped in nuts as a final crunchy crown on a dessert that is simple to source and make, but is a culinary masterpiece. As with most middle eastern desserts they are not very sweet on their own, they and are served with a sugar syrup to add as much or as little sweetness as you prefer on your own.
The recipe as written is the, fairly, traditional way of making and flavoring atayef. As with most thing eventually kitchen experiments happened and while not traditional at all, we discovered that changing up the filling is quite a bit of delicious fun. Raspberries are not found in the middle east for the most part, except for a few specialty shops they just don't exist. However, if you do have access to them they pair beautifully. Just smoosh a bit and fold in to the cream mixture. Caramel sauce folded in was also well received. Chopped spiced nuts in place of the pistachios were well liked as well. I always recommend trying as recipe or dish as written, especially if it's from a culture that isn't yours, and from there make it your own and customize to suit your tastes.
Atayef Recipe
3/4 c. semolina
3/4 c. flour
1 1/4 tsp. yeast
1/2 tsp. baking powder
1/4 c. sugar
pinch salt
2 1/4 c. warm water
1 tsp. vanilla extract

Combine the water, sugar, and yeast and let sit for 10 minutes. Add in the semolina, flour, baking soda, salt, and vanilla. Mix until smooth and cover the bowl with plastic wrap.

Meanwhile combine the water and sugar and bring to a gentle simmer. Simmer for 3 minutes and remove from the heat. Stir in the lemon juice and chill.

Heat a large non stick skillet over medium heat. Add about 2 tablespoons of the batter to the pan and smooth out as much as you can. Leave to cook until the top is dry looking, do NOT flip and cook on the other side or they won't stick together. Remove from the pan and keep cooking in the same method until all the batter is used up.

Beat the heavy cream and sugar until slightly thick, add the pudding mix and beat until stiff peaks form. Remove from the mixer and set aside. Beat the cheese until it's fluffy. Fold in half the whipped cream and flavoring if using and fold until smooth. Then fold in the other half of the cream.

Once the pancakes are cool take one at a time and fold them in half. Pinch the pancake together halfway around the circle to seal the back, leaving one side open.

Pipe the cream in to the filled pancake and dip in the chopped pistachios.

Once all the atayef are formed and filled arrange on a platter and serve with the chilled sugar syrup. 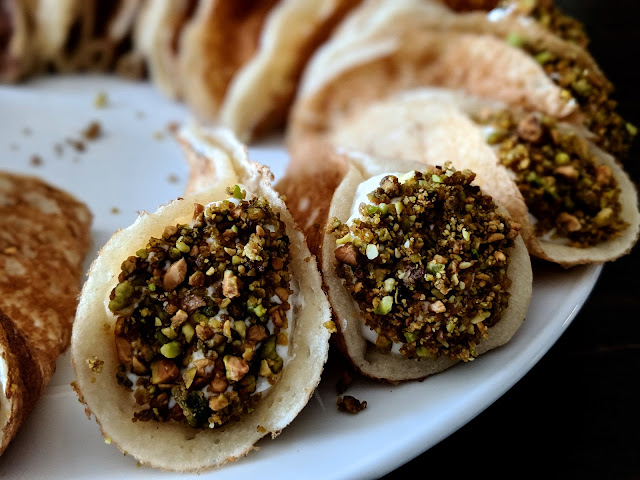