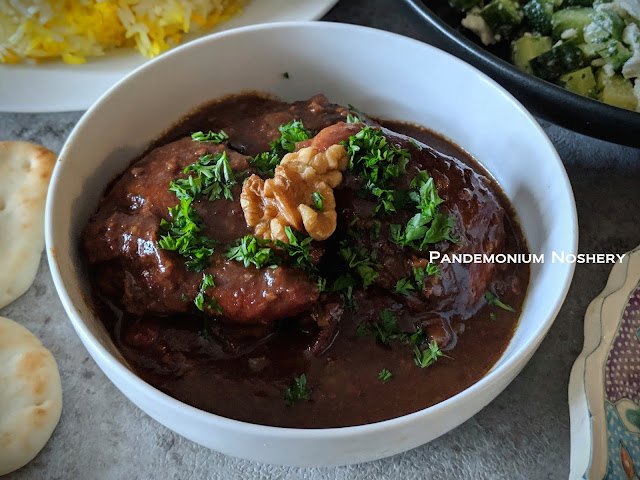 Quite a long time ago I my husband and I planned on going to a Persian restaurant near where he had grown up. Unfortunately on the day we had planned to go out they were closed but I was really curious about what pomegranate chicken would entail and so I stared looking it up. I made a version of pomegranate chicken we enjoyed but it wasn't something I made often, in fact it's been over 10 years since I have done so.

When we were on vacation again a few months ago my kids turned on the TV to Beat Bobby Flay and it was one of their regular judges against Bobby Flay, she picked Fessenjoon to compete with, a dish she described as a Persian pomegranate stew and I was intrigued. I even owned one of the cookbooks from the lady there to judge, a gift from my mother-in-law. So I didn't have the one with fessenjoon in it, but I knew it was something I would need to make for dinner one night.

And so I eventually did, and fell in love with yet another cuisine. This stew is tangy and meaty nd has such a delicious flavor. And so in honor of that we have Persian week here, so check back to see what other delicious recipes I tried out and loved.

Blend the walnuts in a food processor until finely ground but not to the butter stage, you don't want them to release their oils.

In  large pan dry toast the ground walnuts, stirring constantly, for about 10 minutes or until they are a rich golden brown. Add the water to the pan and simmer for 20 minutes.

In a large cast iron pot heat the oil. Season the chicken thighs with salt, pepper, and the turmeric. Sear on both sides are remove from the pan but keep warm. Add the onion and saute until tender. Add the chicken back to the pot and cover with the walnut mixture.

Add the pomegranate juice, the pomegranate molasses, and brown sugar and simmer another 30 minutes. They stew should be nice and thick by this point. Taste and check for the balance of sweet and tangy. If it's not both add a splash of lemon juice or more brown sugar to adjust