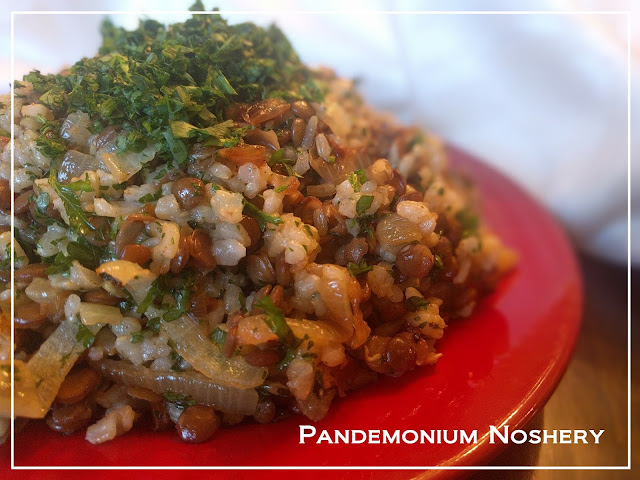 This is so simple with a surprising and delicious flavor.  When HusbandMan and I were in college we ate a lot of beans, this was one of those dishes I learned to make from that time. I made it once and then again the next week, we liked it that much.

It's also a dish that isn't tied to one country, but an area where the Mediterranean and the Middle East meet. There are versions of it eaten in Lebanon, Iraq, Cyprus, and Egypt. As well as probably several other countries in the region. Supposedly the term "mujadara" is an Arabic word for pockmark, referring to the look of the lentils. 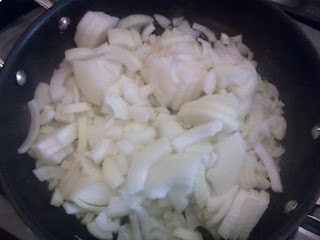 This dish is lightly seasoned so you really get the right flavor without the spices being so overwhelming you cant taste anything else. As one diner at my table said, "it's not what I was expecting, but its still really good" 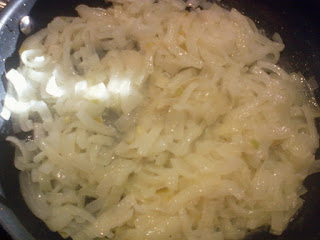 While it may look like a long time to be cooking, the onions take almost an hour, its not really active time. Once you add the sugar you leave them to cook, just stirring every 10 minutes or if they start to crackle. It also looks like a LOT of onions, and it is, but they cook down quite a bit.
Updated 2018: I don't always bother with the sugar when caramelizing now, it's totally up to you. 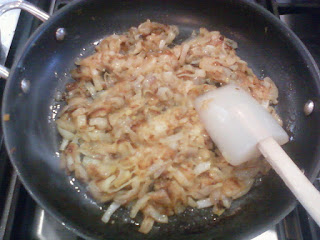 And here we have the final, delicious, stage of caramelized onions. So much smaller and sweeter than the start. Totally worth the time. Esp since they take minimal effort.

Meanwhile, cook the rice in 4 cups of salted water and simmer until the rice is almost tender. Add the lentils to the pan and simmer an additional 20 minutes until both are soft, checking for enough water.

Toss the lentils with the onions, parsley, and seasonings. Serve with additional fresh parsley on top. 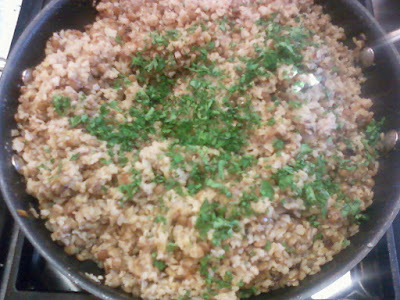