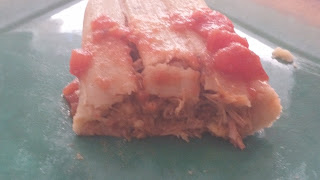 Around Christmas time in Utah it's very common to have people walking through wal-mart parking lots selling homemade tamales by the bag. That is the first time I had tasted anything other than the bitter scrawny canned variety.  From that tamales equal Christmas to me. They were delicious and fun to me and I loved the day my mom decided to buy food from a total stranger for the entire family to risk ingesting. Obviously no one died.

One thing that struck me as I was making these was how much they reminded me of the siopao I made the other day. The flavors and execution were totally different so they shouldn't be the same at all. And yet it's a shredded meat with ethnic seasonings wrapped in a bread or breadlike exterior and cooked. I supposed it not that different from the American bbq sandwich or empanadas or even the Jamacain beef patties.  A meatly filling, seasoned for local tastes, in a starchy pocket to eat.

So I saw someone selling tamales the new high tech way. The place we all gather for the holidays is not longer wal-mart. It's facebook. And I really wanted some. But she forgot about my order and I had to wait another two days, only I was busy that day so I cancelled my order. I had made tamales before, I could do it again right? The recipe turned out so well last time I didn't bother saving it and had to do some googling. So I made some. And they were fairly terrible. But since I had a lot of husks and masa left I decided to try again. This time going back to what I remembered from before.

The recipe I tried first say to make a thick dough, press it on to the corn husk, fill, and roll before steaming (more use of the bamboo basket!). The masa was super dry and I didn't like it. It was also so thick there was hardly space for the meat. That method had to go. A few years ago when I made them though the corn was more of a paste that I spread on the corn husk. I tried that method and it worked beautifully. I did remember that I had bought Maseca brand corn and used the recipe on the side of the bag so I googled them and found what I was looking for.

I cooked my pork roast in onion, garlic, salt, pepper, chili, oregano, and cumin. The next day I shredded and added some mole sauce, a little of the liquid from cooking, and or extra authenticity some TacoBell taco sauce. The rest of the liquid I used in the masa mix, and it was delicious. Of and a little turmeric for color on the pork.

I plan on making more but I would probably also still buy some if I had the chance. They are tedious to make and my filling has never been as good as the ones we bought in the parking lot. 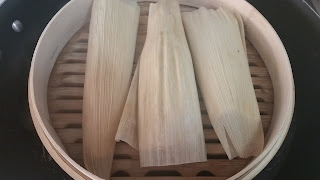 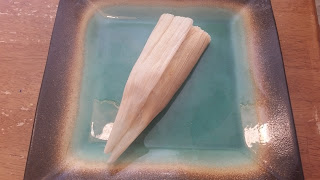