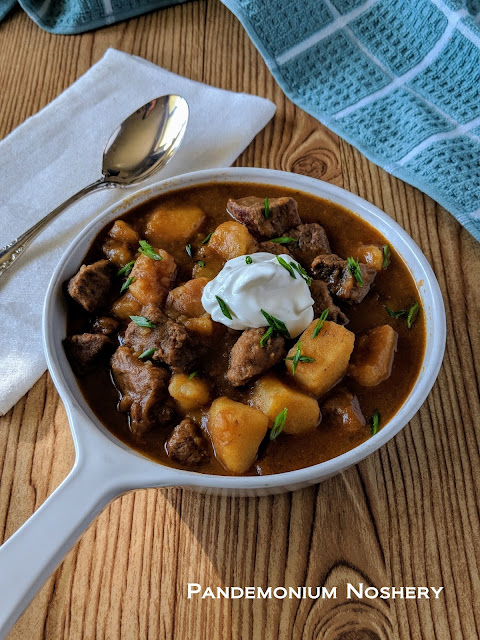 When I was a Girl Scout in Virginia we had an international event once a year (much like my Christmas Around the World Festival). One year my troop chose Hungary, and we had a Hungarian woman come and teach us how to make goulash, I think one of the other girls in the troops mom knew her from the local college.

She said there were three things important to make authentic goulash. Never add flour, tomatoes, or peppers. But then some people swear by those hings, so If I had to guess I would say it's like stew, there is no right or wrong way. Just make sure it has paprika, and lots of it. This is not what I, annoyingly, hear referred to as goulash. Anything that can be mistaken as spaghetti is not goulash.

Paprika should be bright red, and not brownish. To preserve both the color and the flavor of paprika store it in the fridge. She also said it had to be Hungarian paprika. But I get mine in the huge Tones containers at Sams club, I think it's Spanish. So, um,...don't tell on me please?

Serve with a dollop of sour cream, greek yogurt, or creme fraiche whatever you happen to have on hand.

Simmer over medium heat, covered, until most of the water is absorbed, but don't let is go dry. About 1 hour. You don't want it to cook faster than that either. Discard the bay leaves and add

3 - 4 potatoes, chopped
(about 1 baker sized per person)
1 qt. water
4 bouillon cubes
2 additional bay leaves
1 heaping T. paprika
1/4 t. black pepper
Simmer, covered until sauce is thick and potatoes can be crushed easily with a spoon. Crush a half dozen or so of them to mix in with the sauce a bit. This is really important since you will notice I don't add any thickener, just let the potatoes do the job. In the end the meat and potatoes aren't in a traditional sauce, its more like a thick paste that clings to the meat (in a good way!) 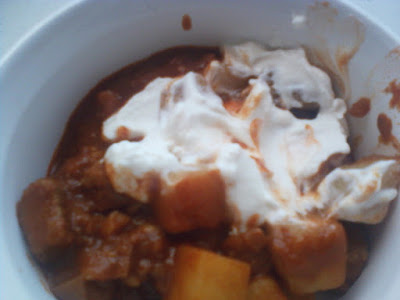