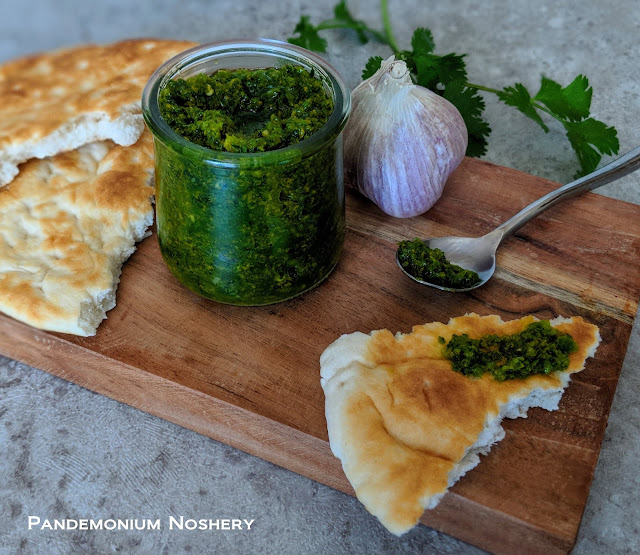 In Israel we started eating hummus. Lots of it. I didn't even like hummus until then, but the packaged stuff in the store there v. store bough in the states is miles apart. And they have lots of it. in any size you want. Except the smaller containers have rings of different condiments on top and they were delicious. I felt silly when months later I realized that the relishes on top were sold just a few feet away by the jar.

In the states making hummus is mandatory. And sadly I left without ever figuring out what the green stuff that was so delicious was. Until last weekend when I went to an Israeli market and saw that they were selling the jars with English labels calling it "schug". Well, feeling silly moment #2 (for this, it's really probably more like 2,936,473+). I have seen recipes for schug floating around so I turned to google and youtube. Look at recipes and videos until my mind went numb and then went in the kitchen to use up the leftover bag of peppers from a recipe the other day I had no idea what to do with.

And as soon as my garbanzo beans cook I get to enjoy this on hummus.

Puncture the jalapenos and/or serranos and place directly on a hot burner. Char on three sides and then place in a zipper sealed bag to steam. Leave for 5 minutes. Once the pepper(s) have steamed remove from the bag and rub the skin off.

Remove the stems from the peppers, and seeds if desired, and place in the food processors. Add the garlic, parsley, cilantro and habanero if using.

Process until finely ground but still a little chunky.

Add in all the spices and blend again until mixed. Remove and stir in the olive oil.