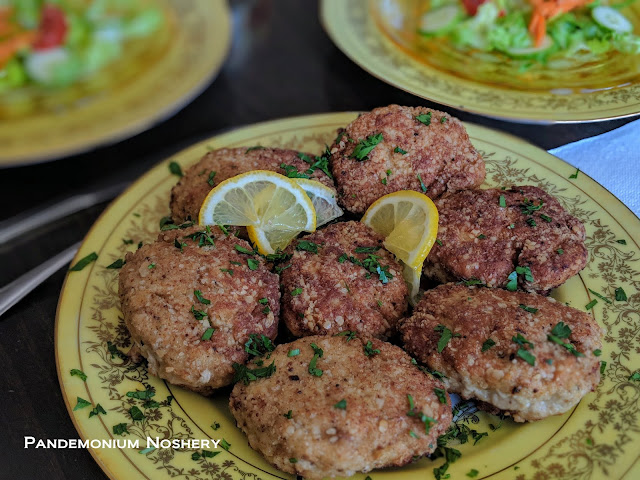 Kotleti are a delicious Russian meat, croquette, fritter, dish. Tender and very flavorful with a delicious crust. Though commonly attributed to Russia, they are a typical part of Ukrainian cuisine as well. Recipe is adapted from Natasha's Kitchen. I think in the future all meatballs should have a crumb coating.

In a food processor add the two slices of bread, I didn't bother to remove the crusts. Pulse a bit until it's medium sized chunks. Add the milk and let sit.

In the food processor add the onion, mayo, dill, salt, and pepper. Pulse until fairly smooth. Add to the meat mixture and mix until well combined. Keep mixing until it becomes slightly less sticky. Add the egg whites and mix in, I did both parts with my hands.

Using a large serving spoon place a glob of the meat mixture in the crumbs. Turn to coat and then form in to a large oval patty. I found it was easier to form once it was coated because it doesn't stick.

Place in the pan with the oil. If the oil is too hot the outside will brown before the inside is cooked. Too low and they will get soggy and greasy.