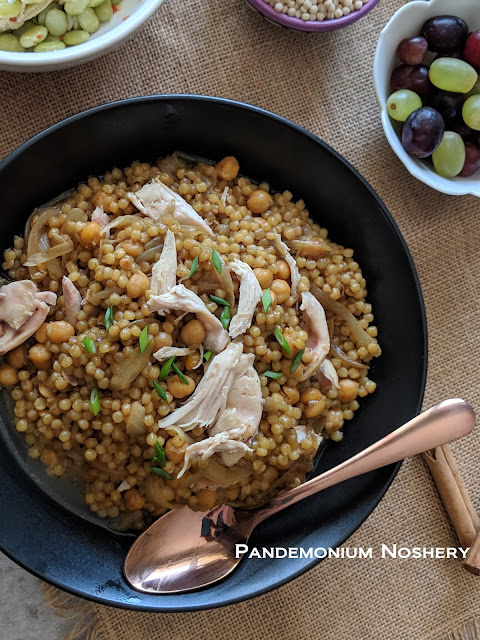 Who doesn't love the convenience of a deli roasted chicken? The are delicious, easy, and economical. Typically when we have one for dinner I plan it for two meals. For the first one we eat the chicken as is, or in the case of this one I pulled of just the meat for tacos. For the second meal I boil the remaining frame down in to a nice stock. There is usually enough meat the falls of the bone at that point that to make a nice soup or stew as well. Or in this case a deliciously spice Palestinian dish called maftoul.

Maftoul is the Palestinian word for the little rolled pasta that is the base of this dish. It's similar to pearl or Israeli couscous in terms of shape and they are both flour based but they are not the same product. Maftoul is made from wheat that has been dried and cracked and then hand rolled in more flour to produce that shape. Israeli couscous, or ptitim as it's called in Hebrew, is a pasta that is rolled and cut to form it. But unless you have an entire afternoon to kill and or are lucky enough to live near a middle eastern market, pearl couscous is pretty close.

Place the chicken frame and 12 cups of water in a large stock pot and bring to a boil. Reduce the heat and simmer for 1 hour.

Strain the liquid from the solids, reserving the broth. Pick through the bones and remove any bits of chicken remaining and set aside. Discard the bones.

In a large skillet heat the olive oil and add the onions without stirring. Leave for a minute or two until starting to grill and then stir. Leave again until they take on some color. Repeat this once or twice more and then keep cooking, stirring fairly often, until the are browned.

Add the couscous to the pan and stir to coat. Keep, stirring every few minutes, until the couscous is toasted.

Add the garbanzo beans spices and stir to coat. Pour in 3 cups of the broth and bring to a boil. Reduce the heat and cover. Let the couscous and onions simmer for 15 minutes and check to make sure they are cooked. Scrape the bottom so it doesn't stick and then if they are still firm return to the heat to keep cooking.

Once the couscous is cooked, it will still be a little chewy, add the shredded chicken and use a fork to fluff and mix in.

Serve topped with sliced green onions, parsley, toasted almonds and the remaining broth. Dish the couscous in to individual bowls and pour a little of the broth in to the bottom of the dish and top with any desired garnishes.


We share Recipes From Our Dinner Table! Join our group and share your recipes, too! While you're at it, join our Pinterest board, too!
Labels: Group Blogging Challenge Middle Eastern Palestinian