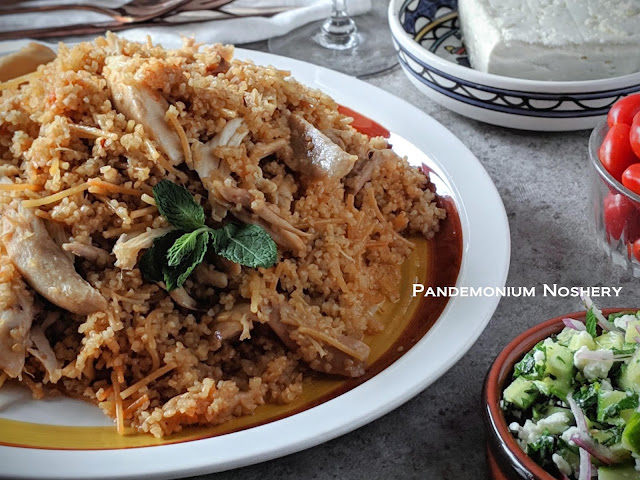 Lebanese cooking is a delightful mix of refreshing herbs and vegetables, an abundance of spices and seasonings, and lots of grains and legumes. Meatless dishes are common along with an endless array of salads. Poultry is eaten as is a lot of seafood. Red meat is less common, with beef being the least seated out of the genre. It is healthy and flavorful, and cannot be beaten. It's always a delight to see at the dinner table.
This particular dish is another delicious offering from Hadia's Lebanese Cuisine, one of my favorite Lebanese bloggers. It's an easy, comforting, and super tasty bulgur and chicken recipe. The best part, well, aside from eating it, is it can be prepped in advance.  I took her advice and cooked the chicken and broth the night before. Then when it was time for dinner the next day,  I started with cooking the second onion. Bulgar is a quick-cooking grain too, which helps. Prepping the night before saves a lot of time during the busiest part of the day.

In a large pan combine the whole chicken, water, 1 of the onions cut in half, the cinnamon stick, cardamom, bay leaves, peppercorns, and bouillon cubes. Simmer for 90 minutes or until the chicken is removed easily from the bone.

Remove the chicken from the liquid and allow it to cool slightly, until cool enough to handle. Remove all the meat and return the bones to the chicken liquid. Simmer the liquid until it is reduced to four cups. Drain liquid once through a strainer and then again through a fine-mesh strainer.

Heat the olive oil and butter in a medium-large skillet. Add the other onion, the chopped one, and saute until it is completely translucent. Add the pasta and cook, stirring constantly, until the pasta is browned. Watch it carefully, it will burn quickly. Once it is browned add the bulgur and cook for another few seconds to coat the bulgar.

Stir in the reduced chicken stock and bring to a boil. Cover and reduce the heat to low. Simmer for 10 minutes. Add the chicken to the pan, replace the lid, and cook over low an additional 10 minutes.

Remove from the heat, fluff the bulgur, and serve with a chopped salad.