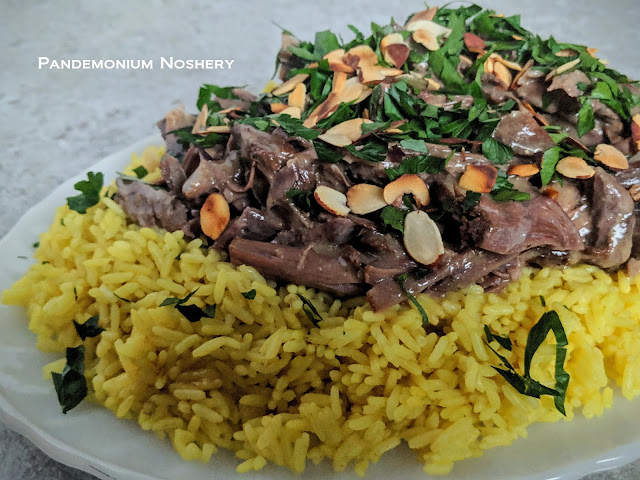 Mansaf is Jordan's national dish, but originally the recipe is of Bedouin origins. Because the Bedouin tribes were nomadic, dehydrated foods were necessary for food preservation. Two of the main ingredients are lamb and jameed, the latter being a dehydrated yogurt. Jameed is similar to labeneh, but much, much dryer, to the point it is solid. Because that is a difficult process and I was worried about it drying safely in the humid south, and because you then reconstitute the jameed I strained the goat yogurt until it was thick like labneh and used it that way.

Greek yogurt is already tangy and fairly thick and will work here. However if you can get your hands on goat yogurt it's really tangy. With cow dairy allergies on the rise, most health food stores carry it. When I went in to purchase mine they also had sheep yogurt and I was really curious so I got three cartons of the goat to use and one of the sheep. It tasted very similar, just a slight bit tangier, so I used it as well. So mine is a mix of both.

The traditional process for mansaf is to cook the lamb long and slow. Because I wanted to use my instant pot, and because the cut I had was lamb shoulder I did have to change the technique here a bit but the end result is the same, and really delicious. 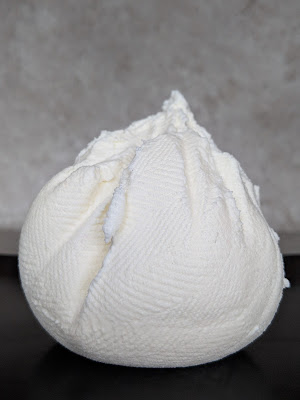 Labneh (start 48 hours in advance)
Combine the goat yogurt and the salt and stir together. Place a thin, clean, non-dyed, piece of cloth in a medium bowl. Scrape the yogurt in to the center and pull the sides up around it. Secure the top with a string or rubber band and secure that to a pen, or metal straw to elevate it out of the bowl. Place in the fridge for 48 hours to allow the liquid to drain out.

Set the lamb aside until it's cool enough to handle.

Place the liquid back in the cooker and set to saute. Cook for about 45 minute or until the liquid is reduced to 2 cups.

When the lamb is cool enough to handle remove the fat and bone but try not to break it up too much, you still want large chunks.

Add the labneh to the reduced broth and stir to combine some, it wont mix in very well. Use an immersion blender to finish making sure it's well mixed. Taste for salt and adjust. Add the lamb to the mixture and simmer over low for 10 minutes.

To serve
Plate the rice, then top with lamb, next the mint and parsley and finally the toasted nuts. Serve the extra sauce on the side.

Rice
Combine the rice, onion, turmeric, bouillon, and pepper in a medium pan when you start the lamb. Allow to sit while the lamb is cooking. When the lamb is de-pressurized, and before you start reducing the liquid, start cooking the rice. Place on the stove and bring to a boil. Cover with a lid and reduce the heat. Cook on low for 20 minutes or until the liquid is gone and the rice is tender.
Labels: Jordan Middle Eastern Palestinian