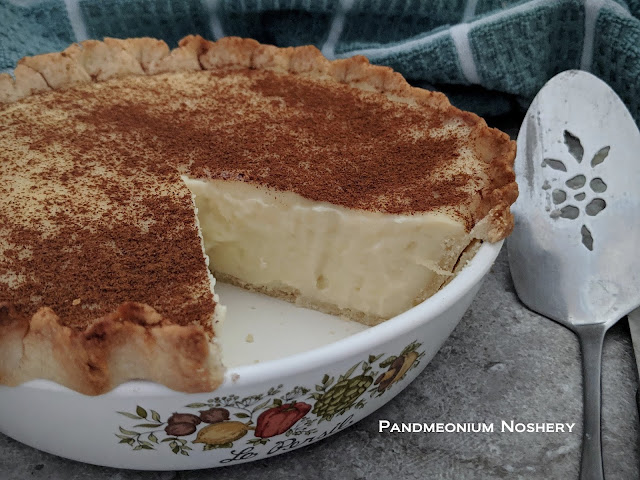 Melktart is a South African treat, like a spiced custard in a pie crust. I have had this on my list for a long time, years really, and one day the stars aligned and it worked out. So I was making a pie for a friend one day with a crust and I had a bit leftover. But not in the proper pan, that was full of the other pie. So I baked it in a small dish that was pretty deep. If you have a proper tart pan, that isn't already housing a key lime tart, it works just as well size wise in that with the crust to filling ratio.

Between two layers of parchment roll the disk of crust out. Place in the baking dish, small and deep or larger and thinner, and crimp the edges.

Bake for 18 - 20 minutes until golden. Remove from the oven and allow to cool.

For the Filling
Whisk together the sugar, flour and cornstarch. Whisk in the egg and keep whisking until smooth and thick, it should also be lighter in color.

In a saucepan combine the milk, cream, butter, mace, allspice berries, vanilla and almond extracts.  Simmer over medium heat until just below a boil.

Remove the allspice berries from the milk mixture. Slowly whisk the the hot milk in to the egg mixture, keep the the stream smaller than a pencil, whisking the entire time.

Once half the milk is mixed in to the egg mixture pour it all back in to the pan and place back on the stove. Keep cooking, stirring constantly, until the mixture is very thick.

Pour the custard in to the cooled pie crust. Sprinkle the top with the cinnamon and place in the fridge to chill. Chill at least 4 hours before serving.
Labels: Africa South Africa Vegetarian