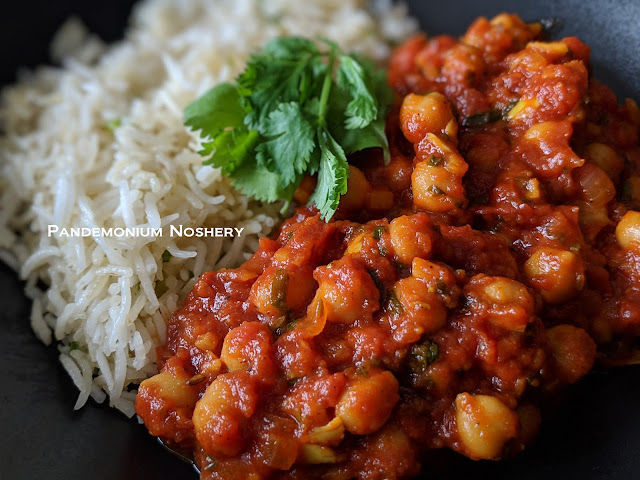 My sister introduced me to a simplified version of chana masala in college and we ate it often. That version was an onion, curry powder, a can of tomatoes, and a can of beans. It was cheap, fast, but still tasty. It wasn't until years later that I learned the base of that dish. This version really isn't much more work than that, a few extra steps that are simple. However the results are amazing! Serve with raita and rice and you have a fast, and cheap, dinner.

Cooked basmati rice, naan, or both to serve

In a medium sized skillet heat the oil over medium high heat.  Add the onion and stir once to disperse evenly. Let the onion cook until they start to brown around the edges. Add the cumin seeds and cook another 2 minutes. Add the ginger and the garlic and cook just until fragrant, about a minute.

Add the tomato, coriander, chili powder, turmeric, and garbanzo beans and stir to combine. This next part of the recipe is pretty flexible. You can simmer for 15 minutes for the flavors to meld, but I like to bring the pan up to a really high heat for a few minutes and then turn it down and allow to simmer over low for at least an hour. This caramelizes the tomatoes and thickens the sauce beautifully.

Add the garam masala, cilantro, and lemon juice and stir to combine. Simmer an additional 5 minutes and remove from heat and serve!