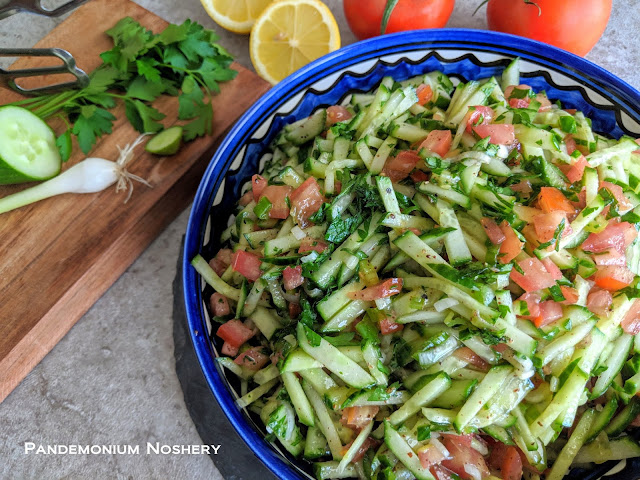 This salad is everywhere in Israel. Every falafel stand and casual restaurant has it in some form. The fancy restaurants might too but I haven't been to any of those. It's usually small dices of tomatoes and cucumbers when served as a salad and julienned cucumbers piled high waiting to be added to falafel. Any type of tomato works, at least that is what I claim, I've never seen it with anything but diced tomatoes. I like the flavor of cherry tomatoes though so that's what I had around. I like a little fresh mint, the rest of my family does not. I also think dill would be really good.

As stated previously, it's great with falafel. But I also like it as a side for macaroni and cheese. We had that with grapes and called it dinner. If you need to store it in the fridge strain the liquid from the vegetables and store separately, combine again before serving.

Whisk together the juice from the lemon, green onions, parsley, olive oil, salt and pepper.

Chop the tomatoes in half, or quarters if they are really large like mine, Dice or julienne the cucumbers. Mix the vegetables in to the dressing and serve immediately.