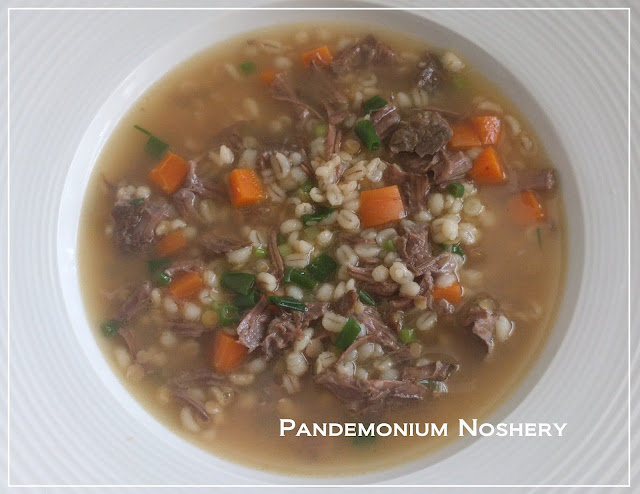 I grew up eating beef barley soup and I love it. The soft barley in there with the stewed down beef are meant to go together. I assumed everyone loved barley soup, how could you not? But when I was having lunch with my grandma one day, who loved soup, she mentioned that the soup of the day being beef barley wasn't something she cared for. Growing up impoverished in the country it was something they ate too often. Thought hers was eaten without the meat to flavor it, it still wasn't something she ever wanted again.

My version is done in two parts for simplicity's sake but can be done all at once if you prefer. I like having the stewing part of it done the night before so that day all I had to do was simmer the vegetables and mix it together and we are ready to eat.

1 - 2 carrots, cut in to small cubes or any shape you prefer
6 tiny or 3 large green onions
1/2 c. dried yellow peas or lentils

Heat the oil in a cast iron pot. I use this same pot to cook the meat in but it can be simmered in a regular pot on the stove or transferred to a crock-pot. Season the meat with salt and pepper and sear on both sides until browned. Add the barley, water just to cover, bay leaf, and beef bouillon to season. This amount will depend on the amount of meat used and the type of bouillon.

Cover the cast iron pot and bake at 325 for three hours. The meat and the barley should both be tender at this point. Remove the meat from the pot and shred. Return the meat to the liquid with the barley. Transfer to a fridge container and chill over night.

The next day simmer the carrots and lentils in water, seasoned again with beef bouillon until tender. A few minutes before the vegetables are done add the green onions. and the meat and barley mix. Stir well to mix it in, the liquid on the meat mixture gets a little thick as it cook. Almost gravy like. Heat through and serve.

If you don't want to do this in two parts the lentils, carrots, and green onions along with additional liquid can be added to the meat at the end of the cooking process. Just remove the meat and return to the pot.
Labels: Scotland