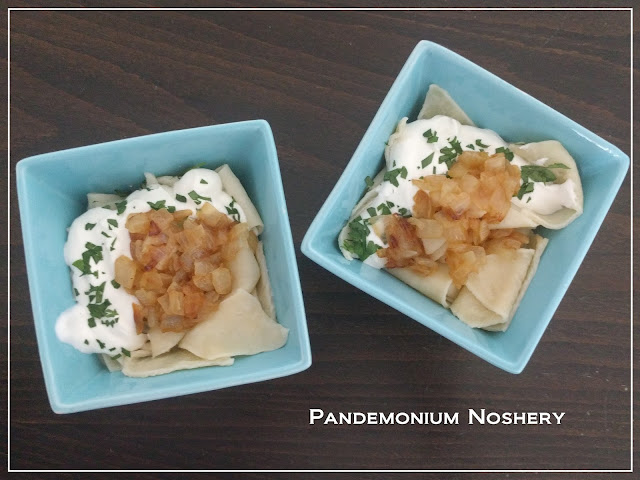 This is an Armenia dish, again courtesy of Heghineh. It's another example of simple equals delicious. Or at least simple in flavors. The dumplings with the sweet onions and garlicy sauce work really well together. Work wise however I can see why she said it's a group effort and to get lots of people in the kitchen to help.

The night before chop the garlic and mix with the sour cream. Cover and leave in the fridge overnight. I've found this has the best garlic flavor without it taking over or being harsh.

Combine the onions and butter in a medium pan over medium heat. Pretty much just leave them like that while you make the dumplings. Stir every 5 - 10 minutes or so, so they don't char. Once they have reached a golden stage add the seasonings and keep cooking. I know some recipes call for a pinch of sugar when caramelizing onions but I don't really like how sweet it makes them. With patience that generally isn't needed, onions have quite a bit of sugar.

My onions were done about the same time as my dumplings but if not just remove them from the heat and leave them until you are ready to serve.

Also at some point in here you nee to chop the parsley and have it ready to go.

Now for the fun part, making the dumplings. Combine the water, eggs, sugar, and 1 tsp salt. Then dump in all of the flour at once and mix until combined. Turn out on a floured surface and knead until smooth and not sticky. Cover the dough and let it rest for 30 minutes. Really I started with this step and got the others going while it rested.

Get a pot of water boiling and add the remaining salt and bay leaf.

Divide the dough in three parts. Set two of them aside and roll one of them out really thin. Cut about and inch apart and then crosswise at an angle so you get diamonds shaped strips. Put the dumplings in the boiling water and cook until they float to the top. I liked the texture better once they had been at the top cooking for about 2 minutes.

Remove and drain. I also added a little extra butter here to keep them from sticking. Serve with the garlic sauce, fresh parsley, and caramelized onions.