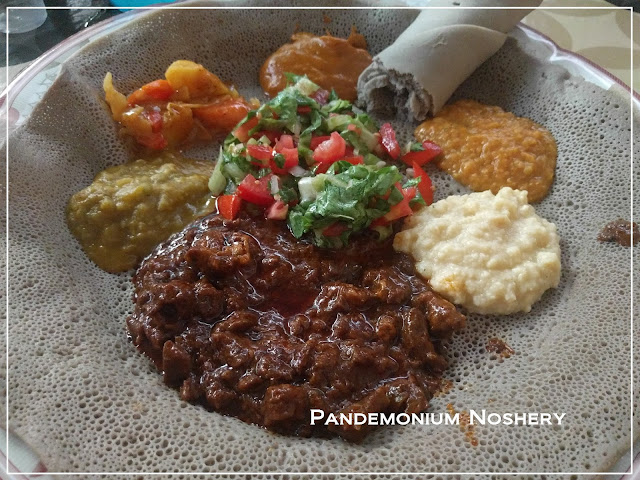 I've long been fascinated with Ethiopian food. It's not just unknown flavors, it's also an entirely new way of eating. Meals start with a large spongy fermented crepe-like bread called injera and topped with delicious mounds of various dishes on top. It's so many different flavors that are all so vibrant and beautiful. I was intimidated to make it at home, having to first ferment the bread and then make at least half a dozen different dishes to go on top. So when I found out there was an Ethiopian place less than 2 miles from my house I knew we had to go. And it was awesome.

The restaurant is something that you would easily pass over if you weren't looking for it. Its a red door with a window no bigger than the door on the left squished between two other establishments in the Old City. When you first walk in it's no bigger on the inside. There are two tables squished to one side, little more than a hallway. But it opens up in the back to a courtyard with quite a few tables. The proprietor spoke about as much English as I do Hebrew, which is to say almost none. But since this isn't a menu type of place with hand gestures and a few basic words we were able to tell her we what we wanted. Which was 2 plates. The other options are 1 plate, or 3, etc... So it worked out. They are large plates, to share. Food in Ethiopia is not done alone and share with family and friends, which I think is a great tradition.

And let me say, it was delicious. The injera wasn't what I was expecting. I'm familiar with San Fransisco sourdough bread, which is a balance of sour and mellow bread where the injera was just sour. Upon looking it seems as though there are different types of injera, the darker grey being the most sour

As for the dishes on top I don't know enough to accurately identify them all but i'm pretty sure on at least three of them. The dark brown stew in the front is my favorite and I think it's key wat, a stew of small pieces of beef cooked in a rich berbere sauce.

Going counter clockwise is buticha. Next is what we were erroneously calling dal. It's actually misr wat but both are a thick stew or paste of cooked red lentils with seasonings. This was another one of my favorites.

The bright orange stuff in the back is shiro wat. It's very thick, and tasted a lot like turmeric. Next around the circle was large chunks of potatoes and carrots and I think cabbage in a sauce that was amazing as well. It was well seasoned but with flavors I felt were familiar but couldn't identify.  And just passed that was another thick porridge or stew made with green peas that was also really good.

In the middle is salata, or salad. It reminded me quite a bit of Israeli salad with romaine instead of cucumbers. The dressing was simple but very refreshing with the thick stews and spices. Afterwards she brought out a basket with some bread in it. It wasn't sweet but almost had the texture of cake. Or like a whole wheat cornbread but with a grain I'm not familiar with. It too though was delicious. 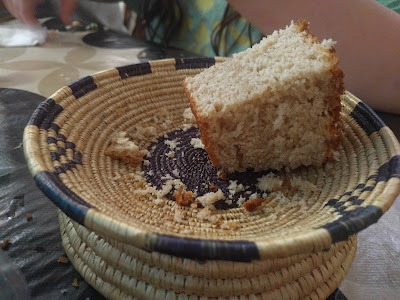