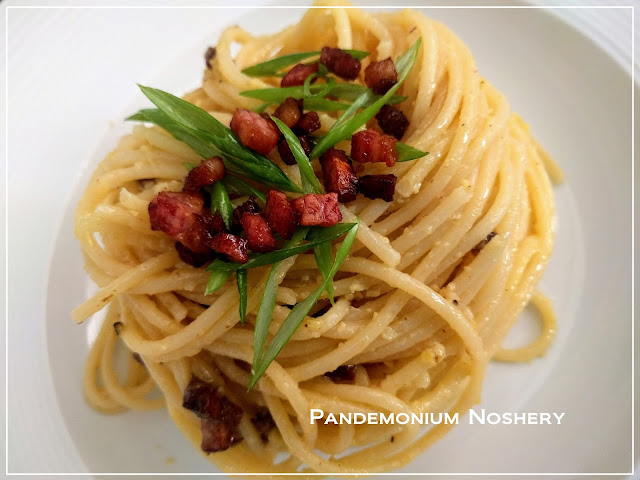 I have to say, carbonara has been intimidating to me. I tried making it once when I was 18 and knew nothing about cooking with egg yolks. You can probably guess, I ended up with scrambled egg pasta. It was not tasty.

Over the years I have admired all the dishes I have seen but never attempted it myself until this week I just decided to go for it. And it turns out it's actually very simple. It's done in three parts. The eggs and cheese in the bowl, the cooked pasta, and the pancetta.

Boil salted water in a large pot.  When it's boiling add the pasta and cook until tender.

In a large bowl whisk together the egg yolks, cheese, and a generous amount of pepper. Set aside.

When the pasta is cook drain it and immediately add to the bowl with the eggs and cheese. Top with the bacon and the olive oil and toss to coat.

Serve immediately. I like to use two tongs and twist it up in to a nest almost and serve it like that topped with some of the pancetta cubes and more cheese.