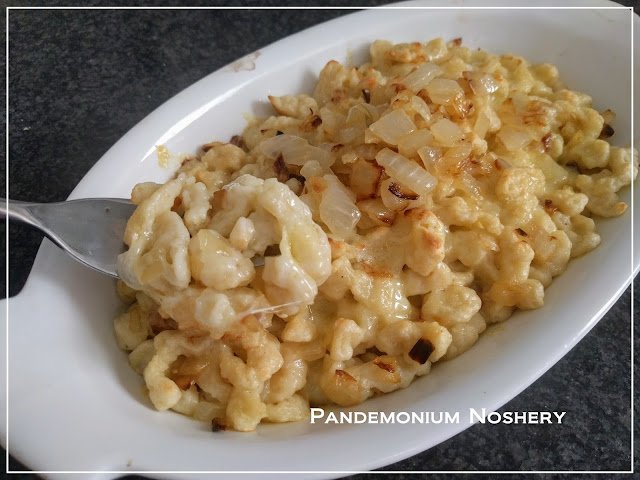 I'm not even going to try and pretend I'm all about simple cooking. I love the tedious, the difficult, and the finicky. Sometimes just the long and slow cooked. But that doesn't mean I don't enjoy a nice simple dish, especially when it tastes delicious. Or it involves cheese. I'm all about anything with cheese.

I went with appenzeller. Emmenthaler and Gruyere are more traditional but even cheddar is nice here. Also not traditional but nice would be the addition if fresh chives. Because I love chives as much as I like cheese.

Cook the spatzle the night before, or at least a few hours before to allow time to cool.

Heat the butter in a nonstick skillet until hot. Add the cooled spatzle and don't stir. Once it looks like it is starting to brown on the bottom then you can stir it. A little, and then leave to brown some more. Remove from the heat and toss with the caramelized onions and 4 ounces of the cheese. Top with remaining cheese and bake at 350 for about 10 minutes. Turn the heat to broil and broil just until a few golden stops appear on the top.