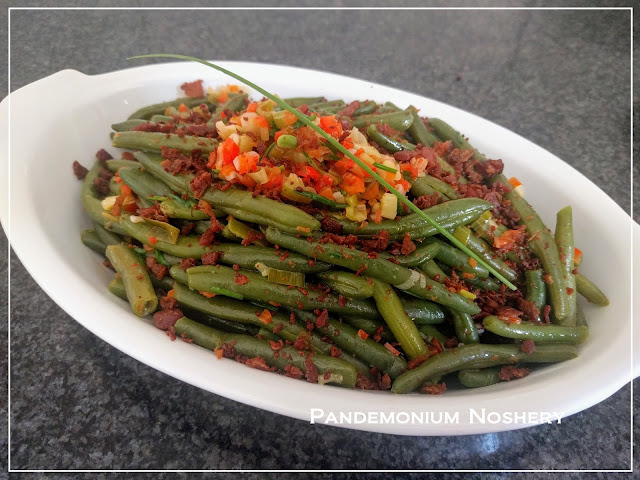 This is an accidental post almost. I decided I really wanted green beans with dinner while I was in the store. Specifically the sweet and tangy dressing from the German potato salad, except on green beans. And so I made them, and they were delicious. And then I decided to google it and it turns out it's a thing. I asked my go-to expert on European foods, my sister, and she said yep. So it's getting posted here. The tangy sweet and sour dressing with bacon really works well on the beans.

Meanwhile, cook the bacon over medium high heat until crisp. Remove the bacon strips. Add the bell pepper and the green onion to the pan and cook until mostly tender. The vegetables should have a decent amount of the oil around them. If they are starting to look like the are getting dry add some butter to the pan. With the the pan still on medium high heat add in the vinegar and cook until reduced some and no longer as acidic smelling, or tasting. Remove from the heat and stir in the salt, sugar, pepper, and chives.

Toss with the cooked green beans and crumble the bacon over the top.
Labels: Germany