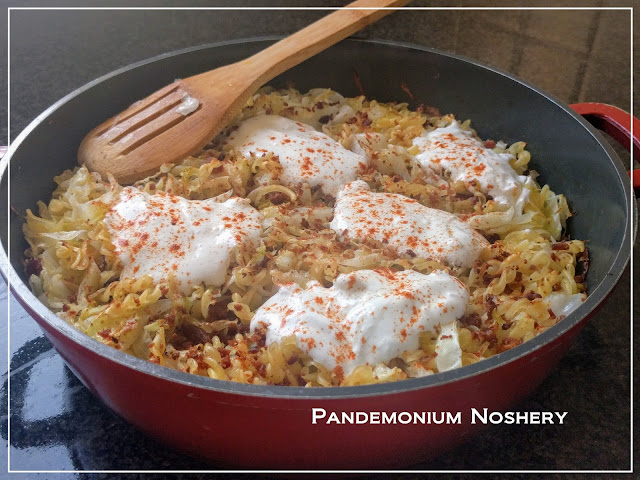 "Cabbage with noodles is a popular and easy dish common
throughout Eastern Europe. In ​Poland, it's called  kapusta z kluski
or haluski, in the Czech Republic, it's known as
nudle s zelí, and Slovaks call it haluski."*

Cook the pasta in salted water until tender.

If using the bacon, cook that while the pasta is cooking. Remove the bacon from the pan leaving the drippings behind. Cook the cabbage in the bacon drippings over medium heat, until the cabbage is just cooked. You want it just tender, not even 100% cooked or it gets an overcooked taste in the oven. Season with salt and pepper to taste.

If, like me, you only have access to shelf stable bacon pieces those work in a pinch. Crisp the bacon in the pan without oil until it starts to pop and smell good. Remove from the pan and add the butter. Cook the cabbage in the butter over medium heat until the cabbage is just cooked. Season with salt and pepper.

When the pasta is done add it to the cabbage in the skillet. Add the cooked and crumbled bacon or the bacon bits.

Stir the sour cream until smooth and drop on top of the cabbage. Sprinkle with paprika and bake an addition 5 - 10 minutes.