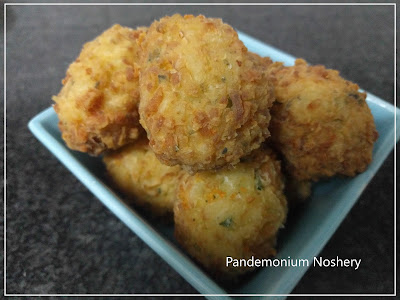 These fritters brought to you buy way of late night snacking and the kids not being thrilled with dinner. Which is rare, but it happens. And also the tub of leftover rice in the fridge. Rice doesn't really reheat well both taste and texture wise but I can't bring myself to waste it. Turns out, frying them with onions does the trick. It was something I remember seeing years ago, pretty sure this is even the same recipe I used last time. 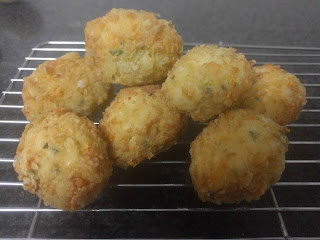 I had a hard time getting them to stick together as it was so I added extra egg and flour. Also, I used havarti cheese since that's what I had around.

Mix it all up together, nothing technical there. Make sure it's sticky enough to hold together, but just barely so they aren't dense. I actually found them a little hard to roll in to balls so I rolled them with two spoons and then dropped them in the flour mix. Once they were coated in flour it was a little easier to make sure the edges were smooth.

Then just drop them in hot oil until golden on the outside. Eat immediately, they aren't good later.