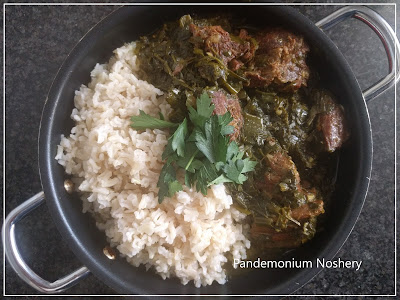 I went back and looked and looked and I can't find exactly which one, but I was reading cookbook reviews on Amazon for Middle Eastern cooking. I'm pretty sure it was one by Claudia Roden or Yotam Ottolenghi. Neither of which I have ever had the pleasure of reading so far, but hope to change one day soon. The phrase though that inspired dinner was something along the lines of "from the sofritos of Jerusalem to the herb stew of Iran...." I can't remember the rest.

Herb stew of Iran? I've never really looked at Iranian food before. And so I looked. And the recipe at "My Persian Kitchen" came the most highly recommended. So I went with that but not before looking around a little more. It seems the dish is common all over that region of the world, including Iraq, Azerbaijan,and  Afghanistan. 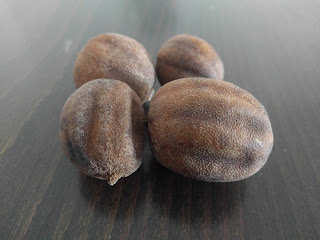 It was even mostly ingredients I was familiar with.  The only two I wasn't were the fresh fenugreek and the dried limes. The fresh I couldn't find so I went with dried. And the limes are called "limona parsi" locally. I really liked the flavor they added. It was a little tart in the stew, but not bitter like I was expecting. I generally don't like cooked lime rinds, but here it worked. 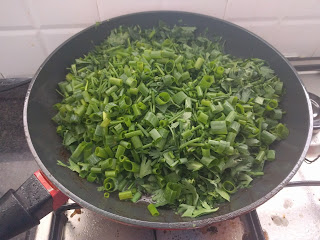 A few of the other recipes I looked at called for sliced green onions in with the other greens, and since I love green onions, in they went. 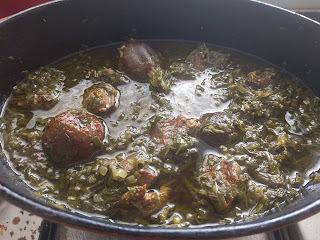 I also left out the kidney beans since I tried to buy some at the store, and despite very clearly being marked 2018 she kept telling me they were no good and pointing at the date. I'm not completely certain what the problem was but the people in line behind me half thought they would be fine and the other half acted like the beans might kill me. With a growing line, and the lady who went to get another bag no where in sight, I decided to leave without them. 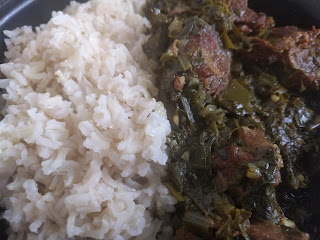 Please do try this, it was really good. I did love it best with long grain brown rice. I thought they paired beautifully.