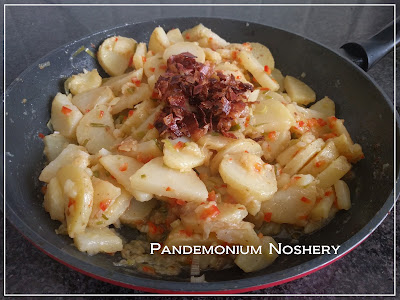 There were two German restaurants where I used to live. It was sometimes hard to pick between the two, one of them is where I discovered beinenstich cake, but the other has the most delicious green bean and cucumber salads. Both restaurants however served spatzel which I just really love, so ordering potato salad was infrequent even though I love it too.

The combination of the bacon rendering, the vinegar, and the onions is a combination that pretty much always works. I can't say how it would be on chocolate cake, actually I can, it will be gross. But pair it with potatoes? Mmmmmmm.

Bacon and lots of it (I had 15 strips)
Half a stick of butter
Apple cider vinegar, also lots of it, probably 2 - 4 Tbsp worth

Potatoes, I have no clue, whatever was left in the bag?

Cut the potatoes in half and then sliced about 1/4 inch thick. Saute in the butter over medium low heat.Sprinkle with a generous amount of salt.

Meanwhile, fry the bacon over medium heat, take extra care not to scorch the oil. If it start to look like there is a lot in the pan drain come of it of in to the still cooking potatoes. Once all the bacon is cooked and removed from the pan add the red pepper and green onions and cook just until wilted. Add 2 Tbsp of the vinegar to the hot pan and immediately remove from the heat. Set aside.

When the potatoes look like they are cooking around the edges and pretty far in tot he middle but not cooked all the way add 1 1/2 cups of water and cover. Let the potatoes simmer until they are tender and the water is absorbed. Douse with at least 2 more tablespoons of vinegar and allow to cool to room temperature.

Once the potatoes are almost cool taste for salt. Then add pepper, any needed salt, and the bacon vinegar dressing to the potatoes, gently stir to combine. You don't want to end up with mashed potatoes but some break down in to the dressing it good, it makes them kind of creamy.