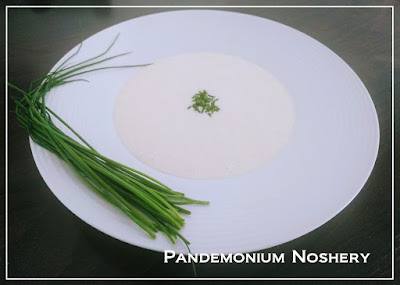 This is a soup of some debate. I've always heard it was French, and indeed it is served in France. But there are also claims that it is an American invention. After looking around a tiny bit it looks like it was made popular in New York by a French chef who was creating a soup he remembered his mother and grandmother making. So, I'd call it French, but I'm gonna tag American as well. Also, the amount of butter and cream involved sway me towards the French side of things.

Melt the butter in a large pan over medium heat. Add the shallot and saute until starting to get soft. Don't let them brown, you don't want to add any color to the soup. Add the water, chicken, and potatoes to the pan and simmer until the potatoes are soft.

Remove the soup from the heat and let cool slightly. Add to the blender and puree some, while blending, slowly add the milk and keep blending until the poatoes are smooth. Add the cream and blend just enough to combine, you don't want to start whipping the cream.

Chill until nice and cold, top with chives, and serve.

Or really, don't. It's not authentic that way but who care? I like it better warm. I made it with shallots instead of the traditional leeks anyway. I had everything for it except them and wanted to make it anyway.
Labels: France United States