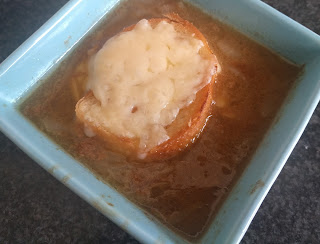 A French classic. So simple it's surprising. You have onions, beef broth, bread and cheese. Minus a few pantry staples that's all folks. So that's why it's also surprising so many people get it all wrong. I've had too many bowls that were inedibley salty. Somewhere the broth tastes canned, it probably was but I used bouillon so that's not an excuse. And others where the onions were missing.

To make sure I too was making it correctly I refereed to Mastering the Art of French cooking, and also because it was fun. But if you already know how to caramelize onions there really isn't anything to add. Caramelize a lot of onions, leave out the alcohol, add the broth. Easy peasy.

Bread to slice
olive oil
Grated cheese, I used Emmentaler but Gruyere is my favorite here (or anywhere)

Lots of onions are fine since when caramelized then shrink down quite a bit. Also I just added the shallots since I chopped a ton yesterday while practicing with a knife.

Caramelize the onions. Once they area ll done turn the heat up high and add the mirin and heat until evaporated. Add the flour and cook, stirring, until it starts to leave a film on the bottom of the pan.

Add the beef stock or water and bouillon along with the black pepper. Simmer for 30 minutes over medium heat to meld the flavors.

To serve toast the bread on each side in olive oil until golden. Put a slice on the top of the bowl of soup, top with cheese, and broil until browned.

And last but not least, the bread it traditionally the size of the bowl so the cheese drapes all across the top with browned blistering cheese. I didn't have bread or bowl to accommodate this and my oven refused to brown the cheese. It was still delicious.