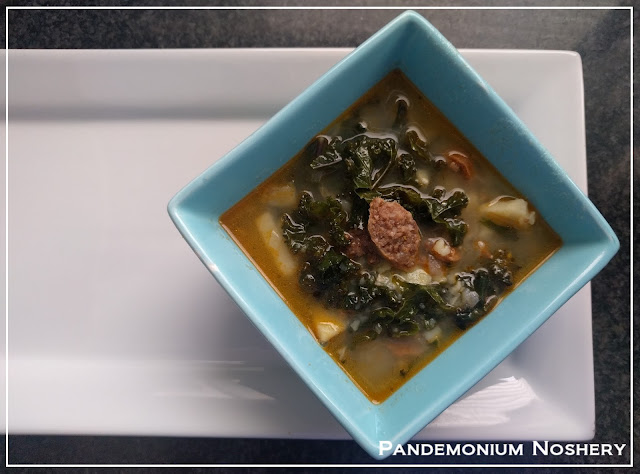 I saw this recipe on Olivias cuisine and had it opened on my phone. For days. So long in fact it was starting to annoy me but I didn't want to forget about it and who actually uses pinterest anymore? But I decided I wanted it closed, or risk accidentally closing it and not being able to find it later so I logged on and saved it, without much hope of actually having it any time soon. Sure it looked delicious, and super easy to make, but the problem was the sausage.

I was in the store today and happened to stumble upon chorizo. I grabbed it and decided to have soup for dinner. And it was tasty. If you're thinking it looks like Zuppa Toscana you absolutely be right. They are fairly similar, yet the change is sausage and the forgone cream are a nice change. I did make a few tiny changes myself. Not many, but a few.

Saute the shallots in oil until almost tender. Add the garlic and saute just until fragrant. Add enough water to cover the potatoes once chopped and enough bouillon to make it taste good.

Now actually add the potatoes. I cut mine in to quarters lengthwise and then sliced them fairly thin. I also added the whole raw sausage at this point and simmered until they were cooked. Just before the potatoes are done but after the sauge is removed add the chopped kale.

Remove the casings from the sausage, slice, and return to the pan. Simmer for 20 minutes and mash the potatoes slightly with a potato masher to break some of them up fine enough to add body to the broth. Then serve.

I liked mine with cheese on top.