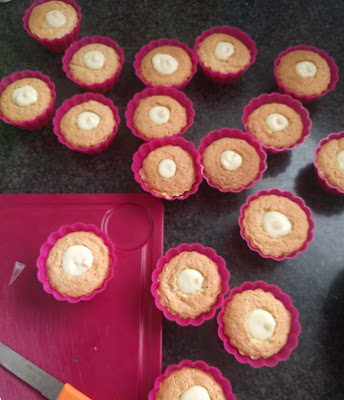 Birthdays are a huge deal to me so yes, I'm still talking about it. Cake is traditional in the US for a birthdays. We have birthday cake, sometimes cupcakes, but the same general idea. Cake and frosting. For my family that is not always the case. Birthday "cake" becomes birthday dessert and you can pick whatever you want, no matter how elaborate, and I will make it. This year however I did go a fairly traditional route with the cupcakes. I eve picked a pretty traditional flavor, playing of the Boston creme pie by adding custard to the center and chocolate frosting on top, not the traditional ganache.

But the actual cake itself? That was pretty cool. It was a slight but on the dry side. I don't know that I would even actually call it dry, just not as puddingy moist as American cakes mostly are. It actually worked perfectly with the pudding in the center. It also wasn't overly sweet which then worked well with the frosting, which itself wasn't overly sweet. I used 70% cocoa chocolate, but it was still stabilized and sweetened with powdered sugar. Another thing I liked about there recipe was the one in the cake pan puffed up evenly without creating a do so I didn't have to level it.

Also they tasted a bit like toasted marshmallows so that was a win. I used a recipe for French butter sponge cake I found online, I can't even remember where. Normally I would link to give it credit but I decided to check it against the recipe in Julia Childs book, a book that arrived after I had made the cupcakes, and it was exactly the same. Every ingredient, measurement, and direction was word for word. So I'm chalking this one up to Julia. 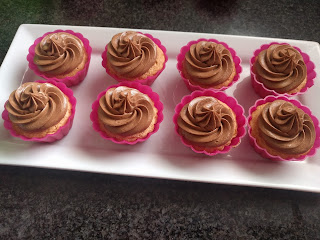