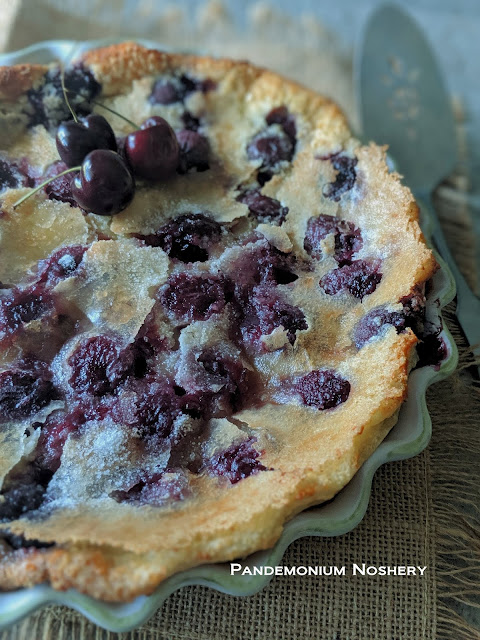 A long, long, time ago, what feels like years but was actually less than one, I had a culture club, and one month was France. The friend hosting it mentioned clafoutis. I can't even remember if she had made it, or considered it, or what. But I remembered seeing a picture of it once, having a vague idea what it was but not being overly familiar. So I looked it up again and thought it looked like it might be kind of dense. And I was not wasting fresh cherries on a dense custard thing.

But then I realized that David Lebovitz had a recipe for this, and if he posted about it, it was probably worth trying. At least once. But as you can see i'm updating this recipe, so it's not actually a "make it once" kind of thing.

The French leave the pits in, the thought is that the pits impart a bit of flavor to the custard around the cherries. Which is a nice idea, but I don't find it worth the hassle of pulling pits out as you are eating it. Some people add almond extract which I am not a fan of. So my secret ingredient to the best clafoutis is ground mahlab, a middle eastern staple that is none other than ground cherry pits. It is sold in most middle eastern markets or online.

Pre-heat your oven to 375F and very generously grease a 9-inch pie pan or other baking dish.

Whisk together the eggs, vanilla, half a cup of sugar, and mahlab. Beat in the milk and then the flour and whisk well to combine. Alternately this part works great in a blender to ensure there aren't any lumps.

Place the pitted cherries in the pan and gently pour the batter over the top.

Place in the oven and bake for 45 minutes or until the center is set and a toothpick comes out clean.

Enjoy hot right out of the oven or chilled later that day.