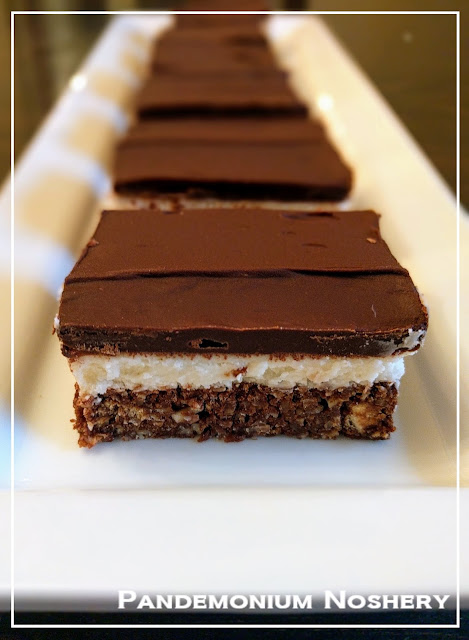 These are sugar bombs. The kind of thing you treat more like candy than a traditional dessert, and eat a tiny square. And yet several times a year I get the urge to make them again, knowing full well they are probably the single most unhealthy food in existence.

Named after the town in Canada where they are said to originate, pronounced "nah-nigh-moe", and stomach achingly delicious. At least for the first two bite, after that... Well. Try it and find out.

Make sure all the dry ingredients are ready and in a bowl before you start the sauce  so you can pour it on immediately. I like to pulse the oats and coconut a few times in the blender so they aren't huge pieces. Also, this works really well with gluten free graham crackers.

Melt the butter in a sauce pan along with the sugar, salt, and cocoa powder.  Keep cooking until the sugar is dissolved. Add the egg and vanilla and remove from the heat. Keep whisking until sauce is thick and slightly cooled so the egg doesn't curdle. It should be shiny and it's ok if it looks a tiny but globular.

Pour the sauce over the dry stuff and mix really well. press it in to the bottom of your pan and set aside for round two. I typically use 8x8 but today I made them in an 8x11.5 without a problem, it's actually the size in the picture.

Beat the butter until fluffy. Once it's fluffy beat int he salt, pudding mix, and vanilla. Then, a tablespoon at a time, beat in the milk. From there add the powdered sugar and beat until it's creamy again. Spread over the layer of chocolate in the pan. Then set aside for round three.

I personally like a mix of semisweet and milk chocolate chips in this. Melt the chocolate in a double boiler. I like to melt the butter separately and then add to the chocolate when the chocolate is about halfway melted. When the chocolate is liquid, but still some chunks in it so it's not totally smooth, remove from the heat and stir until it is all melted. Cool a few minutes and pour over the custard layer. Let chill until the chocolate layer is set and then cut into bars.

I've doubled the recipes before. and it's works just fine on a technical level, but unless you are having a LOT of people over I wouldn't recommend it. 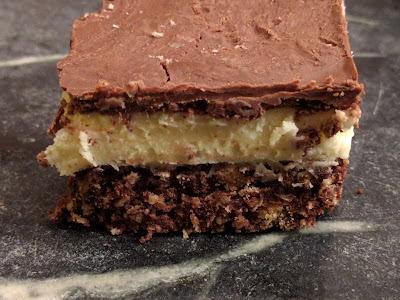