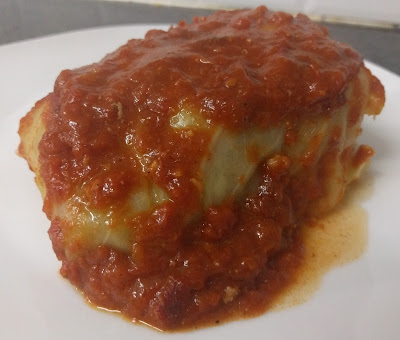 Attempting to trace the origins of the stuffed cabbage was futile. There are less countries that don't make it than those that do. Everyone seems to have a version of their own. All start with cabbage to be rolled in, not to be confused with their cousins the dolmades, those wrapped in grape leaves. Or the Korean version, wrapped in a kimchi leaf. But that is still cabbage, right? Then stuffed with meat and rice but that too has a million variations. And then the topping, tomato is common, but that can mean anything.

I stuffed mine with hamburger and rice, and of course a sauteed onion. I then topped it with a savory tomato sauce that I tried very hard NOT to make Italian flavored. Garlic of course, more onion, and then I think I just added some beef bouillon instead of salt and simmered it. My trick though was that the second it came out of the oven, I spritzed the top with white truffle oil.

I wasn't sure about boiling the entire head of cabbage. So I pried the needed number of leaves loose and simmered them. Take care to trim the stem down if it's really thick or it will be hard to roll. Then I sauteed an onion in butter, toasted the rice and added cooking liquid, mixed it with raw hamburger and seasonings, rolled them in the cabbage and places them in the pan. The whole time I had the sauce simmering on the stove so it was ready to pour on top and then bake to cooked the meat.

It was kind of a lot of effort, but the kids enjoyed them, it was fun to eat, and it reminded me of my grandma.