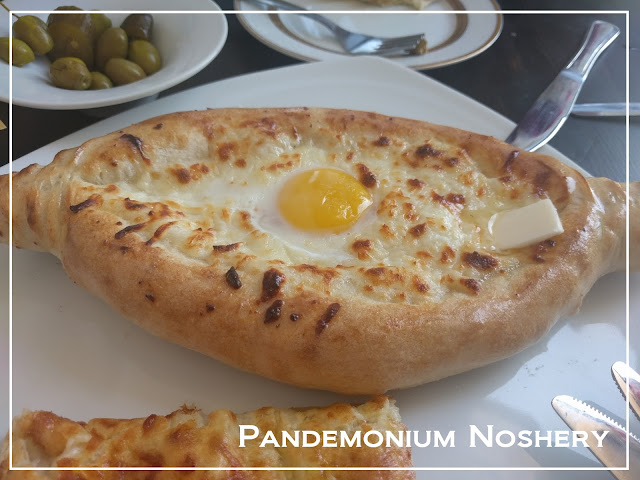 This post has been rattling around in my mind for a little while now, how do I approach this? It's long been on my list of foods to try, ever since I noticed it when looking at Eastern European foods. And it looked marvelous. A fun boat shaped bread, topped with cheese that was baked until it was bronzed in spots, and then topped with an egg after baking so that it was only just cooked but the yolk was still runny, and as if that wasn't enough a generous portion of butter melted on top to throw it over the top.

Only it it was kind of too far over the top. It's so rich and dense that I got two to feed a family of six and we could barely finish them. And speaking as someone who loooooooves salt, and typically has to tone it down when cooking and then add more to my own. Even I found it a bit intense. The one of the bottom we got in Jerusalem and the bread was the best part, like a light English muffin. You stir the filling together to combine the cheese, egg, and butter in to a kind of dip and a bit or two tastes great before you notice the aforementioned salt level, the grease, and that the egg, butter, cheese mix gets find of mealy.

I would love this with just a lot less cheese (who even am I?? This isn't me) and probably just a tiny bit of butter. But then I'm not sure it would ring true to the Georgian idea of the dish. It's a strange world when I don't like the salty cheesey bread. And yet I think I might try it one more time, because the idea is so appealing, just to make sure. 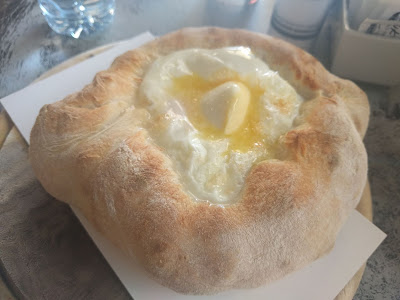