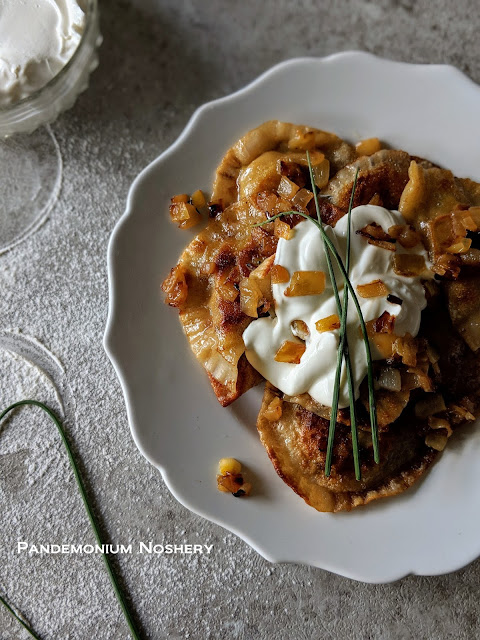 These Polish treats came about almost by accident, I had half a package of wonton wrappers to use up from a pervious cooking project and some leftover mashed potatoes. While I wouldn't ordinarily use the wrappers for pierogis since the dough is a little bit different, they did work to use them up. And made them really simple to make.

Using the butter, caramelize the onions using this method. In a bowl combine the mashed potatoes, caramelized onions, and salt and pepper to taste.

Lay out 6 of the wonton wrappers. Leave the remaining covered, they dry out quickly. Top with a teaspoon of the potato mixture. With your finger, wet half of the wrapper and fold in half. Press to seal and set aside.

Repeat with remaining wrappers. After they are sealed it is ok if they dry out a little.

Place 8 wontons in the water at a time. Only boil for 2 - 3 minutes and remove from the water. Remove them just as they are about to float. Allow to dry slightly as you cook the remaining pierogis. IF they are soggy they wont fry properly.

Serve with sour cream on top.