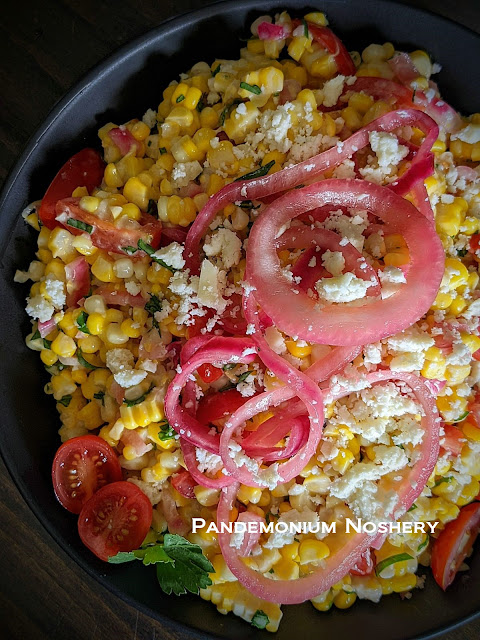 Ok, I know it's the start of summer for most of us but I want to talk about Thanksgiving for a minute. Bear with me, it will all make sense in the end. I make the same thing for Thanksgiving every year at this point, I have recipes I really like and I've started to go with it every year. On the surface, that menu would sound pretty typical for an American menu. If you were to come over and eat with us at first it would even look pretty typical. I have all the usuals, turkey, gravy, and mashed potatoes. Then I have corn, green beans, a casserole dish of something orange. But if you were to look closer those green beans wouldn't have mushroom soup or crisp onions. No, they would be covered in a delicious Armenian dill vinaigrette. For corn, instead of the corn souffle I grew up on I have this corn salad.

Because it's Thanksgiving corn on the cob isn't in season I always make it with a bag of frozen corn that I thaw in the sink by placing it in a colander and running hot water over it. But then I had the bright idea to make this salad when corn is at its best, and it was so delicious. The pickled red onions make it bright and are great with sweet corn and sharp cheese.

I happen to love dinners that are made up of lots of salads. Recently for dinner I had BBQ pork, green beans, pea salad, Caprese salad, and this delicious corn salad. If you like salads as much as I do then you are in luck Foodie Extravaganza Party is showcasing Salads from Fresh Fruit and Veggie Month so there will be so many delicious new recipes to check out.

Corn Salad Recipe
8 ears of corn on the cob
10 cherry tomatoes, quartered
6 green onions, chopped
3 oz. queso panela
1 batch pickled red onions
3 Tbsp. Mayo
1/4 c. dressing from onions
Dash black pepper
Handful cilantro, chopped
Bring a large pot of water to a boil. Shuck the corn and place in the boiling water. Cook for 5 minutes and remove from the boiling water. Allow to cool until it is cool enough to handle.
In the bottom of a large mixing bowl combine the vinegar from the pickled onions and the mayo and whisk to combine.
Remove the pickled red onion from the pickling liquid and chop.
Cut the corn kernals from the corn and place in the bowl with the mayo dressing. Add the cherry tomatoes, green onions, crumbly cheese, cilantro, and black pepper. Stir to combine and serve right away.
Pickled Red Onion Recipe
1 large red onion
1 c. apple cider vinegar
3 Tbsp. sugar
1/2 tsp. salt
1 bay leaf
8 allspice berries
2 cloves
4 dried peppers, cracked open
2 cloves garlic, smashed
8 black peppercorns
Remove the paper from the outside of the onion and slice it without cutting it in half so you cut it into rings. Seperate the rings and pack into a glass jar.
Bring the vinegar to a boil with all of the remaining ingredients. Bring just to a simmer and pour over the onion rings in the jar.
Allow to stand for at least 30 minutes before using, overnight is best.
Labels: Gluten Free Just Me Kosher-Dairy United States Vegetarian