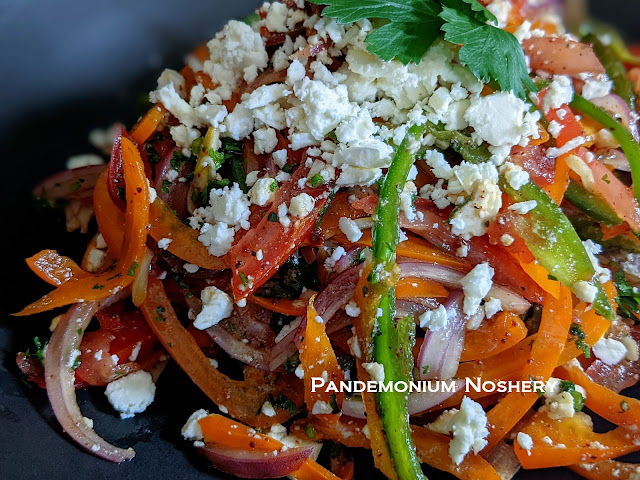 I love chopped salads. I find them delicious and refreshing. The cucumber and tomato version is extremely popular across Eastern Europe and the middle east. There are variations of course, but cucumbers, tomatoes, olive oil, and herbs are a standard. That version is called Shephard's salad in Turkey. This version is just a bit different and is called Gypsy Salad.
Ok, notes for the recipe. Why do I have a Korean ingredient in a Turkish dish? Aleppo pepper would be used in the dish. I have gotten Aleppo pepper before and it was very pleasant, but it was also extremely similar to the Korean gochugaru I keep in my fridge. The Korean option is usually easier to find in the US and more cost-effective. So I use that in place of anything that calls for.
Salad Recipe
1 red onion, sliced
1 bell pepper, sliced thin
1-2 jalapenos, sliced thin
1/2 tsp. garlic paste
2 Tbsp. parsley, chopped
2 oz. feta cheese, crumbled
1 large tomato, sliced thin
3 Tbsp olive oil
2 tsp. pomegranate molasses
1/2 tsp. Aleppo pepper (or sub gochugaru)
1/2 tsp. sumac
Salt and pepper to taste
Place the red onion and a good sprinkle of salt into a bowl. Allow to stand to macerate for 5 minutes.
Add everything but the cheese to the bowl and toss to combine. Chill until cold and ready to serve. Add the cheese just before serving.
Labels: Gluten Free Kosher-Dairy Turkey Vegetarian