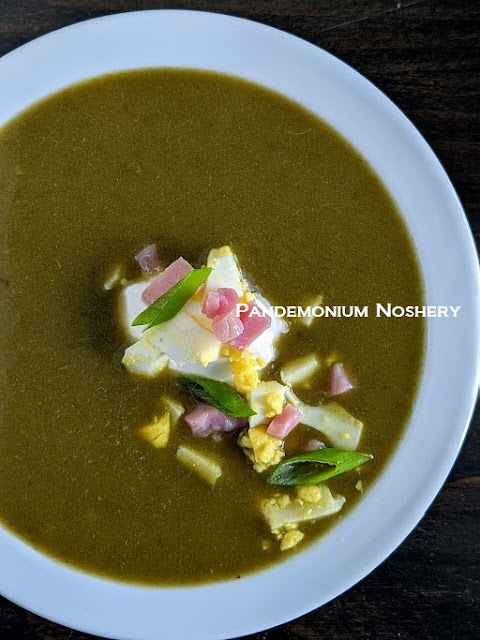 This soup was an extremely delightful surprise. I'm just gonna say it, it's not an inviting color. But the flavor, this is quite wonderful. It is tangy and earthy, almost like dill. The sour flavor is reminiscent of sour soups but without the addition of vinegar, the sorrel is sour on its own.
Pork is traditional in this recipe, I just didn't happen to have any on hand for soup that day so I used bacon renderings and pork bouillon instead. It was delightful, I plan on making it like that regularly. If you have some though it would be excellent chopped into the soup.
If you are wondering what "bacon renderings" are, first off I know you aren't from the south. It is the fat left behind after cooking bacon. I collect it in a glass jar and store it in the fridge. It adds all kinds of great flavor when added to dishes.
1 onion, chopped
2 Tbsp. bacon drippings
1 potato, peeled and cubed
4 c. water
2 pork bouillon cubes
1 (400 gram) bottle sorrel
Leftover pork, chopped (optional)
Hard-boiled egg, ham, green onion, sour cream to serve
Heat the bacon drippings in a soup pot. Add the onions and cook, stirring, until softened.
Add the potatoes, water, and pork bouillon cube. Simmer until the potatoes are completely tender. Remove from he pan and pour into a blender. Add the bottle of sorrel and blend until smooth. Return to the pan and heat through.
Serve with sour cream, ham, eggs, and green onions. Add leftover, finely chopped pork if using.
Labels: Gluten Free Latvia Soup/Stew