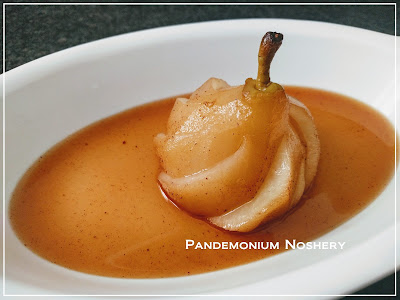 I tried, I really did. I thought I was going to move on from French cooking and then found myself drawn back in. It all started with my other quest, not the food travels one, but the one to reinvent leftovers so they are something new and to reduce waste. I really hate food waste. So the other day I had pork chops in a mushroom gravy. Not even a fancy one, one from a bag of powdered gravy, someone gave it to me. Not something I buy on my own. But cooked down over pork chops it turned out pretty good. The waste here would have been that gravy, we were out of meat but had a little over a cup left. And an idea was born. I also had a package of puff pastry in the fridge I had accidental bought thinking it was pie crust.

And so with puff pastry, delicious gravy, a love of re-purposing leftovers, and an even greater love of Harry Potter. I decided to make vol-au-vents. Which I haven't even posted about yet. But what do you serve with them? The pastry is starchy and the filling is meaty. So a vegetable of course. But for some reason poached pears struck me as well. So I chose that to round out the menu.

Place everything except the pears in a medium small sauce pan. The liquid should come up high enough to cover the pears when added. Heat until boiling. Add the pears and simmer for 25 minutes or until the pears are tender.

Remove the pears from the liquid and set aside. I covered mine but didn't chill.

Leave the sauce on the stove cooking, it should smell delicious already, and reduce until it's syrupy. Taste when it's about halfway reduced, mine was a little bit too sweet so I added another tablespoon or two of lemon juice. Pour the syrup over the pears and let sit for an hour or so. Any longer than that and they need to be chilled.

To serve, core them from the bottom by running a knife in a tight circle. Make sure the knife cut is deep enough to get all of the core while leaving as much of the pear as possible. The pear can be served like that, but I wanted to make it pretty and cut arched slits from the top of the pear through the base to create the fan. 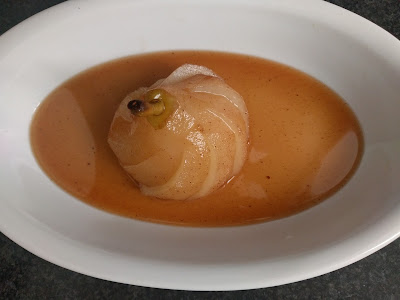