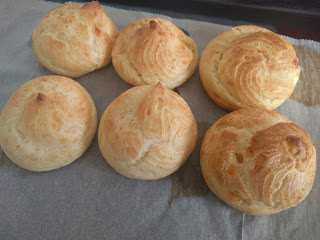 So this week while I was working with the choux paste for the Paris Brest I had some leftover after piping all the rings. Not much, those six you see were all of it. But enough for a treat with dinner. Which was also French, and I will be posting about that this week as well.

Just take your choux pasta and mix in some grated cheese before piping and baking. It caramelized and flavors the puffs as it bakes and they come out light and delicious. The only cheese I happened to have on hand was brie, which while not traditional, is certainly French. Also delicious.

Preheat your oven the 350

Heat the milk, water, salt, sugar, and butter until the butter is melted and the milk is very warm.

Dump in all the flour at once. Don't worry when it looks clumpy, just keep stirring until it forms one large ball. It will probably look a little like playdough. Keep cooking and stirring it until there forms a layer on the bottom on the pan.

Remove from the pan and put in a mixer bowl or bowl you can use with a hand mixer. Beat for 1 - 2 minutes to release some of the steam before adding the eggs. Then beat in the first egg until completely mixed, followed by the second. Add the remaining two eggs, one at time, until completely mixed in.

Then mix in the cheese. Put in to a pastry bag and pipe on to a paper lined baking sheet. Bake at 350 until golden.