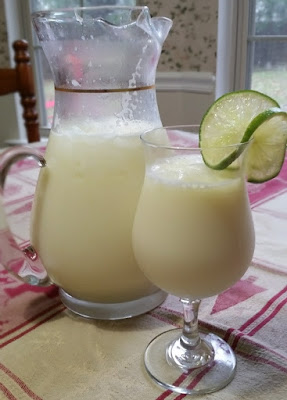 I love Brazilian grill, or churrascaria. The variety of meats they bring around usually accompanied by a great salad bar and chewy pão de queijo. One restaurant in particular that I used to love had what they called "Brazilian lemonade", which contained zero lemon. I happen to prefer limeade, and the sweetened condensed milk was extra nice as well.

But the question on my mind was, "Is this really Brazilian?" And as far as I can tell, from the whole three people I asked who had been there. It's a carnival drink. So it is. And it's delicious. I usually just throw stuff in the blender until it tastes good. So for reference I am linking to Mel's Kitchen Cafe for the basics. I do however like to make mine with sparkling water.
Labels: Brazil Central/ South American Vegetarian