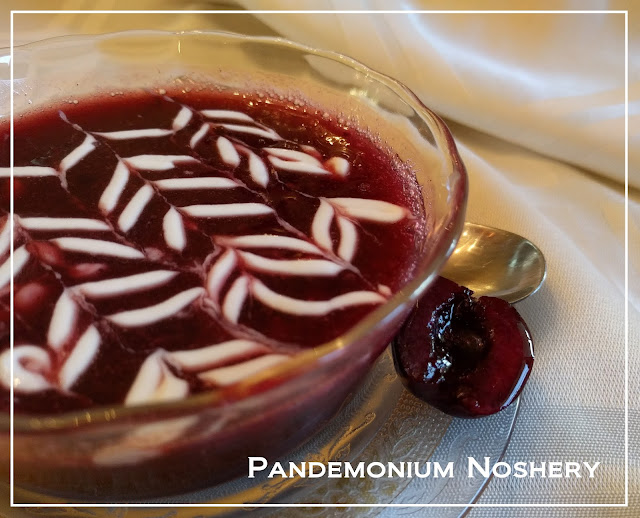 When I was in college I worked with the elderly, and one lady in particular. One Thanksgiving I helped her family get her to their house for lunch with a co-worker. The co-worker was closer to the rest of the family and was asked to bring something. She brought with a Scandinavian fruit soup that was a family recipe. I honestly at this point don't remember which fruit exactly, or which country, just Scandinavian. I do remember however how much I liked it. It was sweet, and spiced, and cold, and not a smoothie. Don't get me wrong, I love smoothies, I'm looking at you ReBar, but this was something on it's own.

That was over ten years ago, but like with anything delicious, I never forgot about it. Procrastinated for a decade is totally me, forgetting delicious food is not. So I finally got around to making it. And I loved it. Surprise! Just kidding, I like most everything.

In looking up the recipe to see how I wanted to tag it, and locate it's origins it seems like a cold fruit soup is pretty common in several areas of Europe. Older recipes it looks like it was made with dried fruit and spices to liven it up in the winter months. Now with modern tech fresh and frozen fruits are the favorite here.

In Hungary meggyleves is a sour cherry soup with cream stirred in for a pastel dish. In Russian and the Ukrainian kissel is a thickened soup or drink of simmered fruit. In Finnish mustikkakeitto with blueberries is the way to go. Is anyone else singing Alan Sherman yet? This one is my favorite of them all, in Sweden it's blåbärssoppa. Also with blueberries. I'm sure there are more, I just didn't look to hard of that.

I didn't have any fresh or frozen raspberries on hand but had a jar of mostly fruit preserves in the fridge so I plopped some in.  Water is ok to thin this out with once it's cold, but the Martinelli's just adds something special. I have found in things that need a bit of warming spice, both sweet and savory, that I prefer allspice over cinnamon. Don't leave it out.

The sugar depends on how sweet your personal tastes run but also how sweet your fruit it. Add it at the end. I usually add about a tablespoon. If you find you accidently added to much, ad a splash of lemon juice to help balance it out. The sides of the bowl in the picture look a little sticky, it's actually the bubbles from the carbonation in the soda.

Simmer the cherries, blueberries, jam, sugar, water, and allspice berries together for about 20 minutes over medium heat until the liquid is red and flavored. Combine the cornstarch and a tablespoon of water. Stir in to the hot liquid. Set aside until cool enough to touch, stir again so it doesn't get clumpy, and chill until cold.

To serve, mix the berry mix with the soda and ladle in to individual bowls. Top with a little heavy or sour cream.

Some people don't like the chunks, so straining is totally an option. I liked them in though. 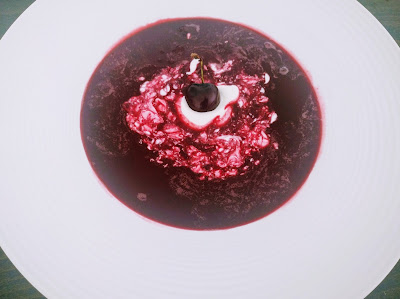