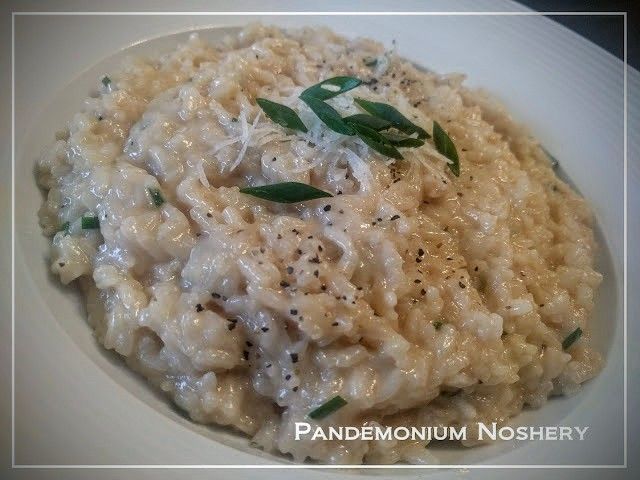 I think that brings our regularly scheduled French programing to a close. For this week anyway. It did help me realize that my problem with cookbooks is I had wanted more.  More story, more instruction, a better glimpse at the cuisine as a whole. I'm not interested in a list of ingredients with directions in random selection. I love the sections that build on each other in J.C.'s book. And I love that more than just how, she explains why. With that in mind I ordered Marcella Hazans Italian cooking books. Her original two, since the revised combination didn't get as great reviews. I hope they are equally as fascinating.

However, the shipping is slow and I am excited to try. So I decided to start a little early. I tried the simple tomato sauce with an entire onion in it, which I will post about later. And then I decided one night to make risotto. And since I wanted the basics, I decided to google Marcellas recipe.

I've only made risotto twice before in my life and eaten it almost as many times. The first was at a restaurant with some friends in Savannah in the form of arancini. I quickly fell in love with it and wanted to try it at home. And so I did, though with a longer grain rice since that's all I had on hand at the time. Seasoned, wrapped around cheese, breaded, fried, and served with a dipping sauce it was fine. Traditional risotto though has much less done to it and needs to shine on it's own. I've also never had it before that way. I didn't bother. Until one day I was at a friend and fellow bloggers house and she made some. And while it was time consuming, it wasn't hard. And lately I've really enjoyed not just having a delicious dish to eat, but more the actual process of making it. Finicky processes, the repetition of making dozens of tiny filled pasta, and long slow steps. And so I made risotto. Also, I didn't have much in the fridge for dinner, but that is totally not the point.

A few days ago a friend came over to show me how she was taught to roast a chicken in culinary school. And so we roasted two. Garlic, black pepper, a splash of lemon, and fresh rosemary may have been involved. Afterwards, as most people do, I simmered down the bones for stock. The homemade stock is what made this, I can't imagine making it with anything less. And as a true southerner, we use it all. I used the hard layer of fat that congeals in the fridge for half the fat to start with. Smaltz would also work I believe. And I did make a few changes to suit my own tastes.

Heat the chicken broth in a pan until hot but not boiling, leave there over low heat until.

Melt the butter and chicken grease over medium heat. Add the rice, and stir until the rice is fully coated. Add the onions and black pepper once the rice is coated but before it has toasted a little. The rice is ok if it gets slightly toasted, I like a little, but not browned. Add about half a cup of the broth and stir. Keep stirring, the secret to the recipe is to constantly stir until entirely cooked.

Once the liquid is absorbed add another half a cup full, and keep stirring. Repeat this process until the rice is tender to the bit but not mushy. It took me about 30 minutes though I know some people say closer to 20. The second to last dose of liquid I added the heavy cream to mine. I like the additional richness it added.

Just before it is done, after the last bit of liquid is added, add the cheese. Stir so it coats the grains and then stir in the chives, parsley, or leave it out.

Garnish with a little reserved cheese and herbs and serve.