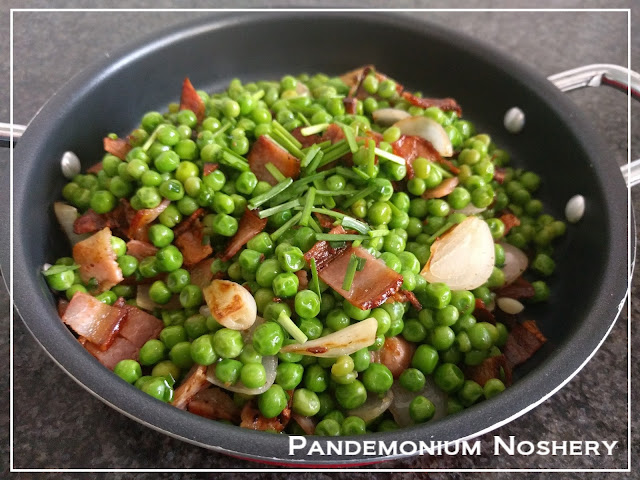 I posted last about a great book I have with cultures from all over Europe. One of the recipes in the book under France is simply called "French Peas". And since this week has been focused on France, and since it involved bacon, I tried it out. For anyone about to try it, spoiler, it's delicious. 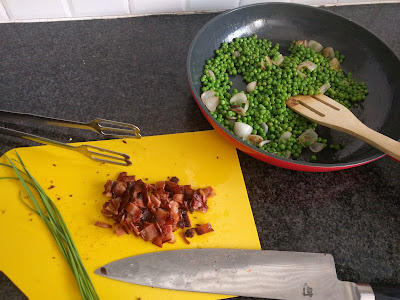 I changed a few tiny things. Looking through The Art of French Cooking I noticed a recipe for peas that involved pearl onions instead of regular so I decided to add my own play on onions in general. I had a couple shallots to use up so I used them. I also did not have parsley, which I would have preferred here. But I did have chives so I used them. The bacon I have is not very salty, so I did find the need to add some but I'm pretty sure with American bacon it won't be necessary. 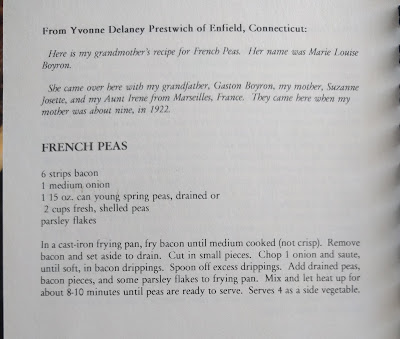 Take the peas out of the freezer to thaw a little while you cook the bacon. They don't need to be completely thawed.

Cook the bacon over medium low heat until until crisp. Not hard, but make sure it's crisp to go with the soft peas. Add the onions, and saute until almost soft.

Add the peas, And cook over medium heat, stirring constantly, until the peas are cooked through.

Taste for seasoning and add salt and pepper as needed. Stir in the herbs and serve.