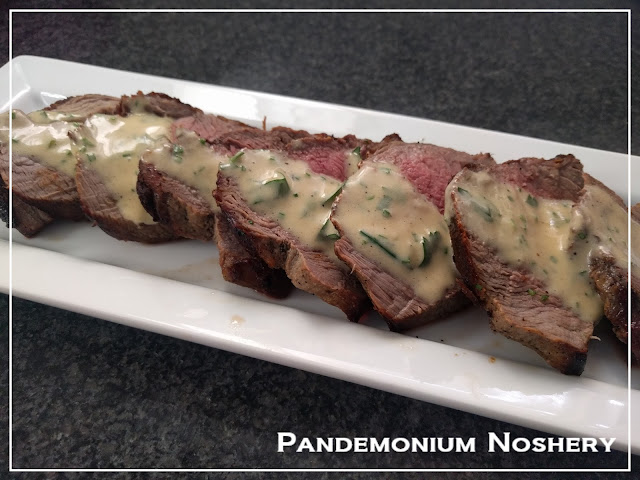 I've been looking forward to making this all week long. I have had it in mind to make Bearnaise sauce since I watched that episode of The French Chef. But what to make it with? Chateaubriand is typical, but getting that here would be difficult and most likely expensive. So with that in mind I went to the store for the last remaining ingredients for the Paris brest. And then half the meat case was full of chateaubriand. Something I haven't seen anywhere around here before at all. And it was on sale. So much so it was less than half what hamburger normally is. So I got two (and I'm going back tomorrow for another, my family said they don't mind in the slightest).

We had the first one earlier in the week for me to practice making it, and because I had to make something for dinner anyway. So that solved that problem. Now for the bearnaise itself. Was it going to be as difficult as people make it out to be? It's a hollandaise family sauce, and those are notoriously finicky. There are always followed with lots of specific directions and even more warnings. Only, it wasn't.  I've made quite a few egg custards and curds before and it's the same specifics there to watch for.

And I had a lot of fun reducing the vinegar, melting the butter and then mixing it all with my whip by hand. I started by beating the egg yolks for a minute first until the were light and sticky. By hand. It was awesome. The end it was so silky and smooth. But I was slightly underwhelmed by the flavor. So I doctored it, and by the time I was done I had essentially doubled the seasonings. So maybe I just like it bolder? I also stirred in the meat drippings at the end as suggested in the book. I also couldn't find tarragon anywhere at all so I used fresh parsley and chives. 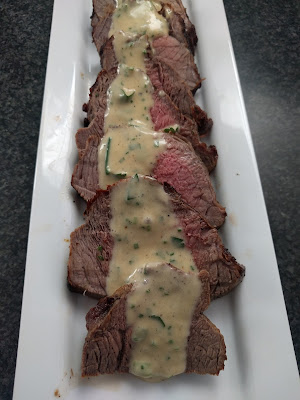 I'm going to go over the basics, I felt they were pretty straightforward. For more details I suggest referring to Mastering the Art of French Cooking. It's on page 84.

Reduce the vinegar with the lemon and all the ingredients down the list to the pinch of salt. Reduce to two tablespoons. Remove it from the heat and let it cool some. You don't' want it hot but it doesn't need to be room temp, and cold is right out. Oh, and don't forget to strain it.

Then take the three egg yolk and whisk them in a bowl until the are light and sticky. Do this by hand, it's so much fun. Then slowly whisk in the vinegar reduction. Set the bowl over a pan of water simmering very gently on the stove. Add one tablespoon of the butter and keep whisking until it gets thick. It takes a few minutes but when it does it's beautiful.

Immediately remove it from the simmering water and add that remaining tablespoon of cold butter. This stops the cooking process. You want that.

Now you get to add that melted butter. Slowly. Whisk with one hand and dribble some of the butter in with the other. Not much or it wont mix it. All mixed? Great, now add a little more. Keep doing that until all the butter is incorporated. Then whisk in the fresh herbs. And taste it. Salt? Pepper?

If it needs it, add it. You don't want your sauce to not be tasty. I added more vinegar and a squeeze of lemon to mine. I started with half a lemon, my recipe says to include the whole one. If you keep whisking you can add them in just fine. And lastly I added the meat drippings. The color wasn't as light afterwards but the taste was delicious.

Also keep in mind that anything you add afterwards might thin out your sauce some. Mine was actually fairly thick, and luscious and creamy. But it's a butter sauce, so once I drizzled it on the warm meat it started to thin out.