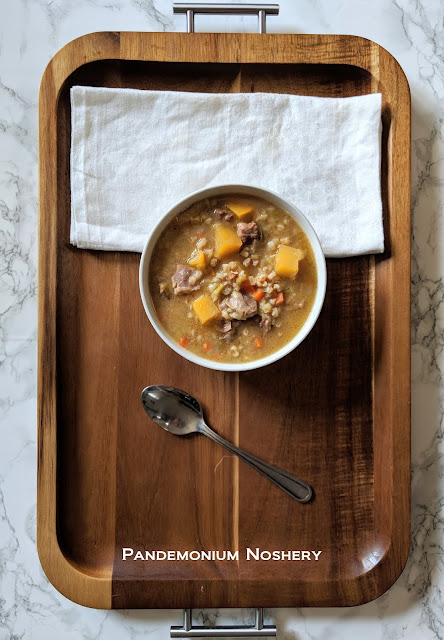 I had planned on company coming over for dinner one night and splurged on some stew lamb from a local farm to make Rogan Josh with. I tried it with beef later and it just wasn't the same. So with my family and company I thought three pounds would be great. But then we all got sick, I had to cancel, and then I had three pounds of lamb to use up. While I am still planning on a curry night, that would be a LOT of curry. So I decided to make something else with half of it. And then I saw a post on Facebook about someone in Iceland eating lamb soup. And then I knew what I was doing with it.

The soup turned out to be savory and delicious with a nice lamb flavor. I used a little bouillon to enhance the flavor but I didn't want to use so much it overwhelmed the lamb. I also wasn't sure which one to go with so I used both. If you happen to have lamb broth or bones to make your own with I would certainly do that.

Toss the lamb with the flour and heat the oil in a cast iron pot.

Add the lamb to the pot in batches, about a third at a time and brown on two sides. Remove from the pan and keep warm. Repeat with remaining meat until it is all browned.

Return the lamb to the pot with the leeks and garlic. Sauté about 5 minutes just until the leeks are wilted.

Add the barley and cover everything in the pan with about 2 inches of water. Add the two bouillon cubes. Cover and simmer for 2-3 hours until the meat and barley are tender.

Add the swede and carrots and replace the lid. Stir every 15 minutes, at this stage it starts to stick some. Keep simmering until the vegetables are tender. 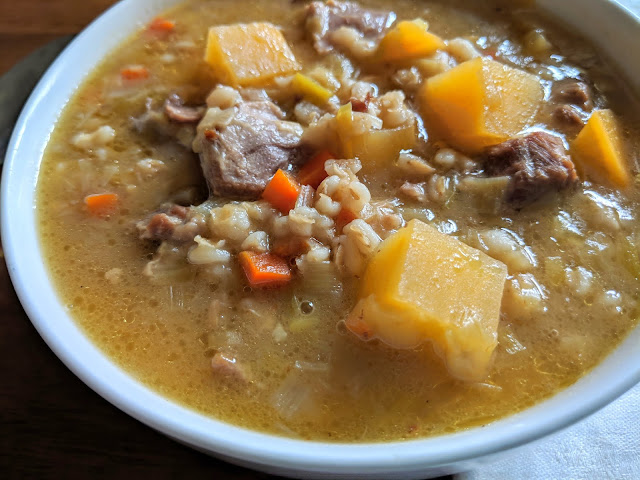